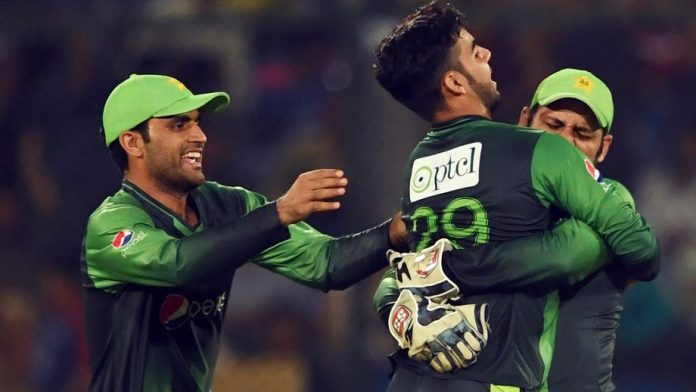 KARACHI: Pakistan have completed whitewash as Babar and Hussain comfortably chased down a respectable 154 runs total with eight wickets to spare.
Chasing 154, Sarfraz XI went off with a flying start as Fakhar Zaman and Babar Azam put up 61 runs for the first wicket. However, after scoring 40 runs Fakhar went back to the pavilion after getting caught behind the stumps.
Meanwhile, in-form Babar and Hussain Talat continued their dominating run with the bat and took the team close to the target.
Babar after scoring his half century was caught in the deep by Walton. He made 51.
The breakout star of the series, Hussain Talat made unbeaten 31 and made sure Pakistan cross the winning line.
Emrit and Smith picked up one wicket each for West Indies.
Earlier, after winning the toss, West Indies captain Jason Muhammad decided to bat first. After two batting collapses, the visitors again went off to a disastrous start with Walton went back to the pavilion without opening his account.
However, Fletcher and Samuels batted with great responsibility as took the team total to 74. Samuels departed after scoring 31.
At this stage, West Indies again suffered a middle order collapse, as they lost three quick wickets including half centurion Fletcher.
Wicket-keeper cum batsman Ramdin did the recovery work and took the team’s total to 153/6. He made unbeaten 42.
Shadab Khan took two wickets each while Faheem Ashraf, Usman Shinwari and Nawaz took one wicket each for Pakistan.
With this victory Pakistan completed third whitewash, which is most by any team in T20I cricket. – APP