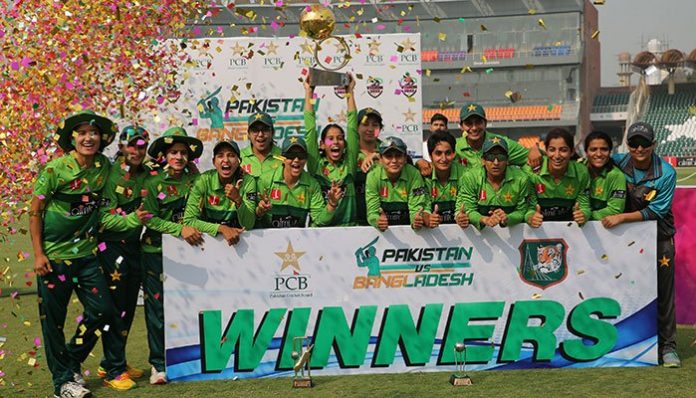 LAHORE: Pakistan women defeated Bangladesh women by 28 runs in the third and final T20I at Lahore’s Gaddafi Stadium to win the series 3-0.
After opting to bat first, Pakistan limped to 117 for seven at the back of Javeria Khan’s half-century.
The opener cracked a 48-ball 54, hitting seven fours. This was her second half-century on the trot after she had scored 52 on Monday.
Omaima Sohail also chipped in with 31 from 29 which included two fours and a six.
Bangladeshi pacer Jahanara Alam was once again the pick of the bowlers as she picked three wickets for 12 runs in four overs, while Rumana Ahmed took two wickets for 19 runs.
Anam Amin’s left-arm spin put a dent in Bangladesh’s run-chase from the onset as she bowled Sharmin Akhter and Sanjida Islam in space of three deliveries in the second over of the visitors’ innings.
Bangladesh failed to recover from the early blows as Pakistan tightened their grip over the match. Anam and debutant Saba Nazir finished with two wickets each for 10 and 22 runs, respectively.
Nigar Sultana was the only standout player from the Tigers side, scoring 30 off 44. Fargana Hoque was the other notable run-getter.
Pakistan’s Javeria was awarded player of the match, while Bismah Maroof was named Pakistan player of the series for scoring 108 runs in three matches at an average of 54.
Jahanara Alam bagged Bangladesh player of the series award for taking nine wickets in three matches.
The two sides now go toe to toe in a two-match one-day international series at the Gaddafi Stadium to be played on November 2 and 4.