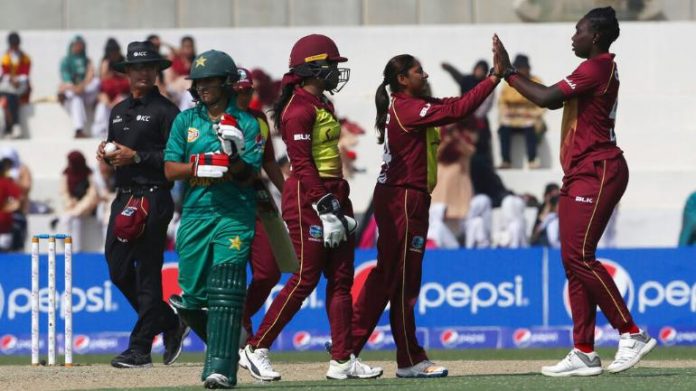 KARACHI: Nida Dar smashed a spectacular 53 and took two catches and a wicket as Pakistan women defeated West Indies women by 12 runs in the third and final T20 international at Karachi’s Southend Club on Sunday to avoid a series clean sweep.
Dar’s 53 off 40 balls included 5 fours and 2 sixes, as she helped propel Pakistan to 150-6 after the hosts won the toss and opted to bat.
Opener Umaima Sohail contributed 28 while Aliya Riaz hit 24 not out.
Windies women had a wobbly start to the chase, losing their opener Kycia Knight to the second ball of the opening over by Anam Amin. The tourists were never allowed to dominate the innings courtesy of Pakistan’s disciplined bowling and fielding.
Anam Amin bagged three wickets and Sana Mir took two. Aiman Anwer, Nida Dar and Nashra Sandhu claimed a wicket apiece.
Windies women clinched the series 2-1 after beating Pakistan women by 71 runs in the opening T20 on January 31 and in the Super Over in the second fixture.
Former Pakistan captain Sana Mir became the first Asian woman to complete 100 T20Is by playing in the match today. She is only the sixth woman from around the world to complete a century of T20Is. Daendra Dottin of the West Indies leads the list with 110 T20Is to her name.