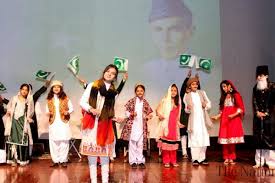 BEIJING: A group of Pakistani students presented an exquisite and stunning cultural performance at a reception organized here to mark Nowruz Day, an ancient festival of the New year widely celebrated in all states of the Shanghai Cooperation Organization (SCO).
Attired in vibrant and colourful costumes, students of the Pakistan Embassy College Beijing (PECB) danced at the tune of ‘Bhangra’, giving the audiences from China, Russia, Azerbaijan, Kazakhstan, Kirgizstan, Tajikistan, Turkmenistan, Uzbekistan, Turkey, Iran, Afghanistan, and India a rare glimpse of Pakistan’s rich culture and traditions.
Pakistan Embassy, Beijing set up a stall to showcase national arts and crafts and different aspects of Pakistani cultures including traditional costumes, folk music and dances etc.
Some young Pakistani boys and girls attired in their traditional dresses and dancing at the tunes of different folk songs in front of Pakistan’s stall particularly drew the attention of the participants.
Addressing on the occasion, Secretary General, SCO, Vladimir Norov expressed gratitude to the heads of diplomatic missions of the Shanghai family for their assistance and active participation in the celebration of Nowruz.
He said the ideals of Nowruz and the Shanghai Spirit were very close and largely coinciding, and there the celebration of Nowruz had a deep meaning and special significance in strengthening mutual understanding and the friendship between peoples of SCO countries.
“A unique feature of Nawruz is that it calls for the preservation of peace and prosperity in every home, in every country, throughout our planet,” he added.
Warm words spoken by the SCO Secretary General were followed by greetings from ambassadors, senior diplomats of the SCO member states, the special representative of the Chinese government in the SCO, and the team of the SCO Secretariat.
During the festival, other SCO states established booths and presented musical performance to display their respective cultures and traditions.
Guests were welcomed with bright spring flowers and had an opportunity to see an exhibition of national arts and crafts.
The reception jointly organized by the missions of the SCO countries in the Chinese capital was attended by around 400 guests including ambassadors and representatives of diplomatic missions in China, as well as prominent public figures, scientists, journalists, business people, and cultural representatives.
Nowruz is an international holiday that has been celebrated for thousands of years by people living in various countries covering the large territory from the Balkans and South Caucasus to Central and South Asia, as well as Russia and Western China.
It is observed on the day of vernal equinox – March 21-22 and is celebrated by more than 300 people in the world.