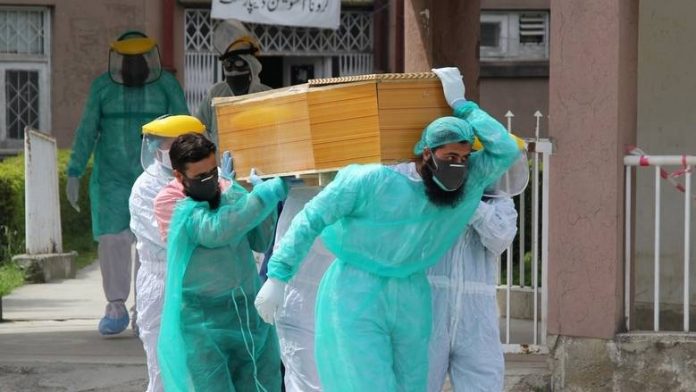 ISLAMABAD: Pakistan’s death toll from novel coronavirus reached 385 on Thursday as 24 more deaths were reported in the past 24 hours while the nationwide tally of Covid-19 patients jumped to 16,735.
According to details, 6,340 coronavirus cases have been confirmed in Punjab, 6,053 in Sindh, 2,627 in Khyber Pakhtunkhwa, 1,049 in Balochistan, 339 in Gilgit-Baltistan, 343 in Islamabad and 66 in Azad Kashmir while 4,315 patients have recovered so far.
Punjab is the worst-hit province by the coronavirus pandemic where 6,340 patients have been tested positive. Chief Minister Sardar Usman Buzdar said the province is now going to start smart sampling.
The CM took to Twitter and wrote, “Punjab is going to start smart sampling and a committee has been formed in this regard which will give its opinion to devise future strategies based on the test results.
“Initially, the government’s priority was to conduct tests of those individuals who were placed in quarantine centers.
“Now we will be able to analyze the situation better by conducting tests of local community as we have increased our testing capacity and the burden has reduced.
Sindh is the second most affected province with 6,053 COVID-19 patients and its governor, Imran Ismail, has also been tested positive for the epidemic.
The Governor Sindh took to the twitter to make the announcement saying, “I have just been tested Covid 19 positive, Allah Kareem inshallah will fight it out.”
He further said, “@ImranKhanPTI thought us to fight out the most difficult in life and I believe this is nothing against what we r prepared for. May Allah give strength to fight this Pandemic Inshallah.”
Earlier, Sindh government spokesperson Murtaza Wahab told that 182 children under ten and over 900 persons over 60 years of age are suffering from the pandemic in the province. He urged all to stay at home.
The tally of Covid-19 patients in Balochistan has surged to 1,049.
The number of coronavirus cases is increasing in Balochistan as the provincial regime announced relaxation in the lockdown.
It has been learnt that the virus has started transmitting locally and the government needs to take tough decisions to counter the epidemic.
National Assembly Speaker Asad Qaiser has been tested positive for the novel coronavirus. The National Assembly speaker took to the twitter to make the announcement saying, “I have just been tested COVID-19 positive and I have quarantined myself in house.”
He urged the nation to take precautions and sought their prayers.
Asad Qaiser said that he had symptoms of fever for the last two or three days but now he is feeling well. The NA speaker went on to say that his son and daughter have also been tested positive for the virus.