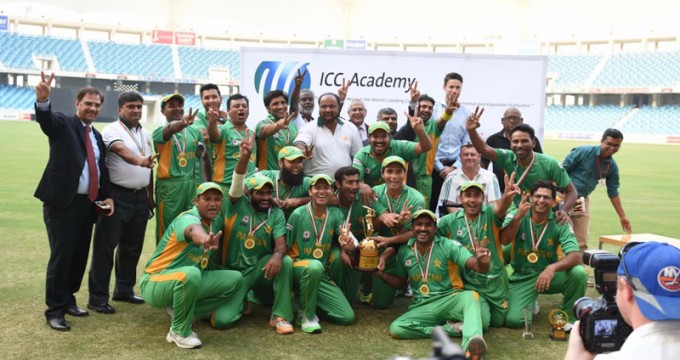 KARACHI: Pakistan disabled cricket team won ICC Academy PD Twenty 20 Tournament at the Dubai International Cricket Stadium in the United Arab Emirates on Monday.
National team defeated defending champions England handicapped team by 3 wickets to win the T20 tournament.
England had won the championship beating Pakistan in the final last year in Bangladesh. The tournament was actually arranged to be played between 5 countries but India and Afghanistan had withdrawn due to financial issues.
England won the toss and decided to bat first, set a target of 137 for the loss of 5 wickets in the stipulated 20 over.
Jamie Goodwin was the top scorer with 40 runs in 31 balls with 4 fours and 1 six, Gordan Laidlaw scored 34 runs off 40 balls, Jordan Williams scored 17 runs and not out while Callum Flyyn made 14 and Hugo Hammad 13 runs not out.
Left Arm spinner Nihaar Alam took 2 wickets while Jahanzaib Taiwana and Abdullah Ejaz claimed 1 wicket each.
Pakistan chased their target in 138 for the loss of 7 wickets in 19.2 over.
Hasnain Alam made 39 runs off 32 balls with the help of 3 fours and 1 six.
Jahanzeb Tiwana hit 29 runs off 27 balls with 1 six and 1 four, Adil Abbasi scored 13 runs off 8 balls with 2 fours, Zubair Saleem (12) while Abdullah Ejaz (9) remained unbeaten. Dan Reynaldo took 2 wickets for 24.