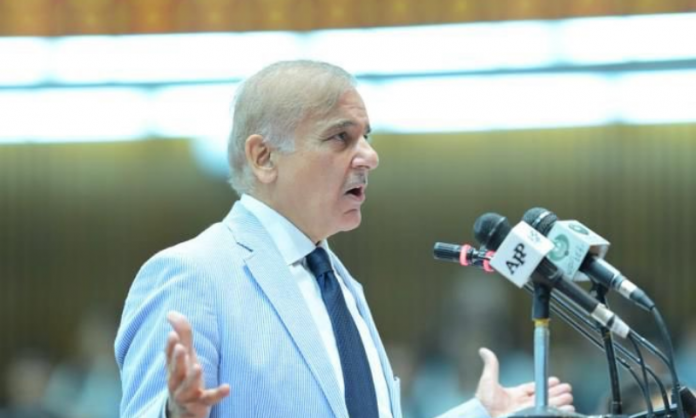 KARACHI: Prime Minister Shehbaz Sharif on Saturday warned that Pakistan’s desire for peace should not be taken as weakness.

In his address at the passing out ceremony at the naval academy, the prime minister — who is on a day’s visit to Karachi — said the navy plays an important role in guarding the country’s maritime borders.

“…I am also proud of the Pakistan Army for making the defence impregnable,” he added.

The prime minister expressed happiness over witnessing women cadets in the passing out parade.

“You are a guiding light for all Pakistani women,” he said.

On his arrival in the city, Chief Minister Sindh Murad Ali Shah received PM Shehbaz and later the premier inspected a guard of honour during the passing out parade at the naval academy.

Political meetings
The prime minister held a detailed meeting with CM Sindh to discuss the overall political and development situation in the province, sources said.

Apart from this, he also met with delegations from the PML-N and MQM-P.

The MQM-P delegation stressed the appointment of a governor and the implementation of the agreement that was made with the PPP when the then-opposition sought MQM-P’s support to oust the PTI government.

Later, the prime minister travelled to Nawabshah to offer condolences to PPP Co-chairman and former president Asif Ali Zardari on the demise of the latter’s mother.