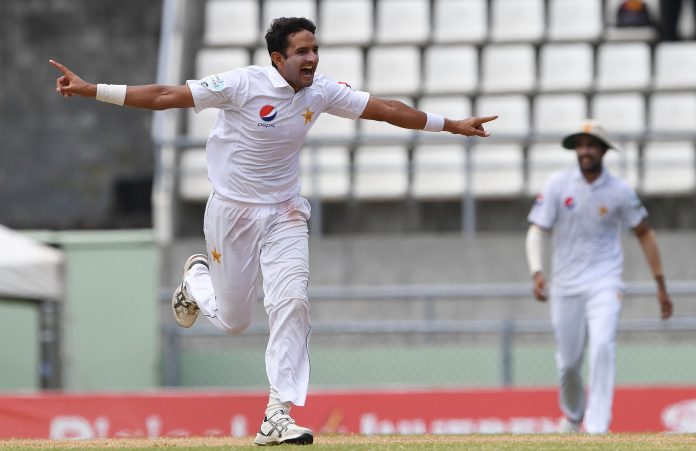 DUBAI: Mohammad Abbas was the hero of Pakistan’s series-clinching win over Australia in the Abu Dhabi Test, and also the star of the latest Test match rankings.
It was the Abbas show in Abu Dhabi all right. In the first Australia innings, he led the way with 5/33 to help Pakistan take a 137-run lead. Then, after the batsmen had set Australia 538 to win, he scythed through the top and middle order on his way to figures of 5/62.
Abbas’ tally after 10 Tests is 59. He’s already bagged four five-fors in Test cricket and this was his first 10-wicket haul in a match. No surprise then that he has dashed up the ICC Test Player Rankings for bowlers, all the way from No.14 to No.3 with career-best rating points of 829.
Only James Anderson and Kagiso Rabada are ahead of him, with 899 and 882 points.
Among the other Pakistani bowlers to make big moves up the ladder was Bilal Asif, who picked up three wickets in the first innings. With the six he got in the first Test, Asif now has nine wickets in two appearances, which has helped him get to No.52, a rise of 17 spots.
This was also a Test where many of the Pakistani batsmen got big scores without, remarkably, getting to three figures. Fakhar Zaman, on debut, hit 94 and 66. Sarfraz Ahmed, the captain, also had two good outings, scoring 94 and 81. Azhar Ali (64) and Babar Azam (99) also scored half-centuries in the second innings.
Asad Shafiq, with 0 and 44, slid three spots to 24th, but the others all moved up. Ahmed rose 17 places to No.25, Azam nine spots to 76th, Ali held on his place at No.15, and Zaman entered the table at a solid 68th.
Understandably, there wasn’t much joy in the rankings for the Australians.
Usman Khawaja scored just 3 in the first innings and didn’t bat in the second after sustaining a meniscal tear that might require surgery. He had reached No.10 after his heroics in the first Test, but came down one spot after the Abu Dhabi Test.
The Marsh brothers Shaun and Mitchell also had poor Tests, and series, and that was reflected in the rankings too, but there was good news for Aaron Finch, Travis Head and Marnus Labuschagne, three players who made their debuts in the series and gave decent accounts of their abilities.
Finch followed up his 62 and 49 in the first Test with 39 and 31, and rose15 spots to 59th. Head was up into the top 100 at No.97, and while Labuschagne remained outside the top 100 in the batting table despite a rise of 76 places, his leg-spin, which netted him five wickets in Abu Dhabi, took him up to No.65 among bowlers, a jump of 35 positions.