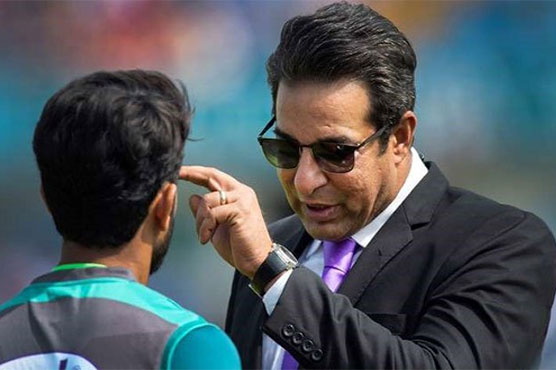 London: Former captain and Swing Ka Sultan Wasim Akram has said that Pakistan’s performance against South Africa at Lord’s on Sunday was a perfect answer to critics and he was happy to see the team doing good.
Wasim however said that the win shouldn’t overshadow the mistakes players committed on Sunday, specially in fielding department.
“We have dropped 14 catches in the tournament. We are top on the list of teams dropping most catches in the World Cup which isn’t a good sign,” Wasim said.
“This isn’t something new, but we need to overcome this problem,” the former captain said.
When asked what was the main reason behind dropping seven catches in match against South Africa, the former fast bowler explained that players didn’t wait for the ball to come and instead jumped towards the ball.
The former captain praised Sarfaraz Ahmed’s decision to opt for batting after winning the toss. He also appreciated the way Pakistan’s top ordered performed against South Africa.
“Everyone – from fans to expert – appreciated the decision. There was little grass but the wicket was dry from inside and Pakistan team read it perfectly,” he said.
“Openers did well, Babar did well, but Babar needs to convert his fifties into hundreds,” Wasim said.
He also stated that Fakhar is now learning to stay on wicket which poses threat to opponents as his presence on wicket keeps the bowling teams think about stopping his slogs.
Replying to a question, Wasim said that Sarfaraz should have come to bat up in the order instead of sending Imad Wasim.
He hoped for a repeat of 1992’s show when Pakistan team will meet New Zealand at Edgbaston, a team which is unbeaten in the tournament.
“They were unbeaten in 1992 too before playing against us and we won the game, they’re unbeaten again and I hope we repeat the show, but boys will have to give their best,” Wasim said.
“There’s no need to change the winning combination,” the former captain added.
Wasim also shared his excitement on the way Pakistani spectators came to support team at Lords on Sunday and termed team’s performance as best reply to critics.
“This is the best way to respond to all attacks instead of requesting on social media,” Wasim said.
“I was happy to see crowd celebrating. There were big names today and to see it all it made me feel like that game is being played in Lahore, not Lord’s,” Wasim concluded.