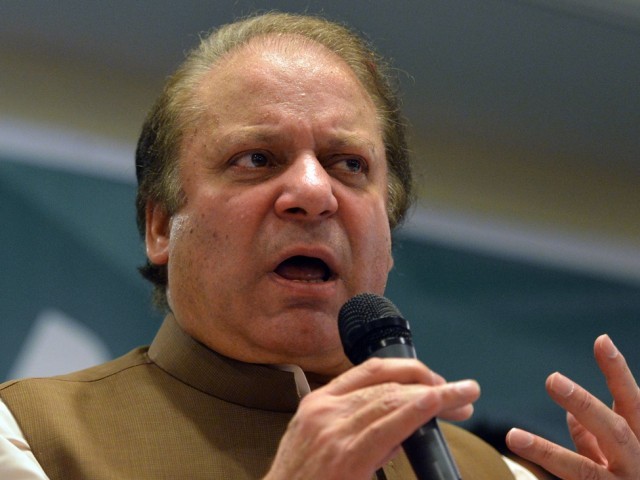 KARACHI: Former prime minister Nawaz Sharif on Friday told an audience in Karachi that the future of democracy in Pakistan remains uncertain, asking them why, after more than 70 years of independence, seminars to discuss the topic still need to be held.
Addressing a seminar, the thrice-ousted premier said the political history of the country is full of attacks on democracy.
“Every time democracy tried to stand on its feet, it was struck down,” he claimed. “That pollution, which over the past 70 years has prevented the democratic system from reaching a point of stability, persists in the air around us today.”
He recalled that in 1953, Khawaja Nazimuddin was forced to quit as prime minister of the country and was replaced with Muhammad Ali Bogra.
“Since then, prime ministers have been treated like toys,” he complained.
“It is even more unfortunate that whenever democracy has come under attack, some sections of the judiciary — instead of standing with the people, the Constitution and democratic rule — have supported dictators.”
“The judiciary has favoured the doctrine of necessity, and certain sections of the judiciary have used such theories to give legitimacy to martial law,” the former premier alleged.
He recalled that in 1956, when the first constitution was drafted and a general election was dye to be held in 1958, a martial law was declared, aborting the process.
“The constitution was cancelled. The matter reached the courts and, once again, taking support from the doctrine of necessity, the martial law was legitimised,” he alleged.
“In 1999, when our government was toppled and martial law was imposed, a judge said that a great thing had been done.”
“They [the judiciary] said [to Musharraf], ‘We give you jurisdiction for three years, do what you please with the Constitution.'”
“This was a jurisdiction that the courts and the judges themselves do not have. How could they have extended that jurisdiction to someone else?” Sharif asked.
Sharif also recalled that several prime ministers had been removed from their posts before completing their terms in the past.
“The country knows what was done to me, what was done in Balochistan and how the chief minister there was removed,” he said.
The former premier, who was disqualified by the Supreme Court in the Panama Papers case last year, was referring to the ouster of Nawab Sanaullah Zehri as Balochistan chief minister earlier this month, termed by some PML-N leaders as a conspiracy against the party.
“The dictators harmed democracy, but despite our bitter history, I want to say that the future of democracy in this country is bright.”