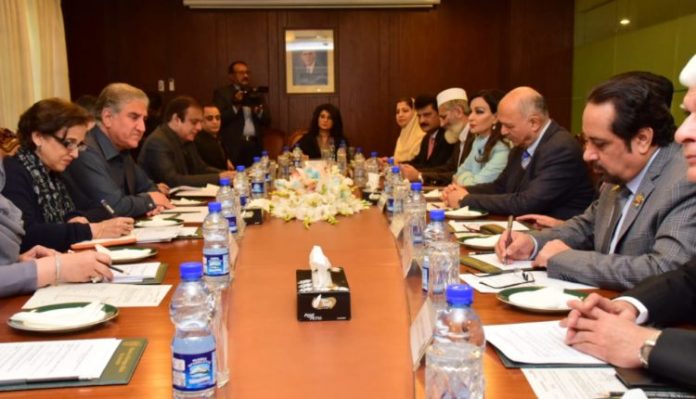 ISLAMABAD: Foreign Minister Shah Mahmood Hussain Qureshi said Monday, Pakistan will continue to extend vigorous political and moral support to its Kashmiri brethren until their principled right to self-determination is not accepted.
The minister was talking to members of the Senate Standing Committee on Foreign Affairs, headed by Senator Mushahid Hussain Sayed. FM Qureshi said, “we have a complete national consensus over the Kashmir issue.”
The reports of United Nations Office of the High Commissioner for Human Rights (OHCHR) and All-Party Parliamentary Kashmir Group have unveiled the reckless attitude of India in the occupied Kashmir, he noted.
Moreover, Qureshi invited all the political parties of parliament and Kashmiri leadership to attend seminar organized at House of Commons on February 4 and an exhibition regarding Kashmir on February 5 in London.
Earlier today, speaking to media in Multan, the minister said that he will visit Oman on Tuesday (tomorrow) to discuss the wide ranging bilateral and regional cooperation with the leadership of the middle eastern country.
Meanwhile, he apprised mediamen about his visit of London in next month. The purpose of the visit is to meet the House of Commons and raise the Kashmir issue, he added.
“We will present Pakistan`s stance on Kashmir and Indian atrocities being carried out in Occupied Kashmir before the Britain’s leadership.”