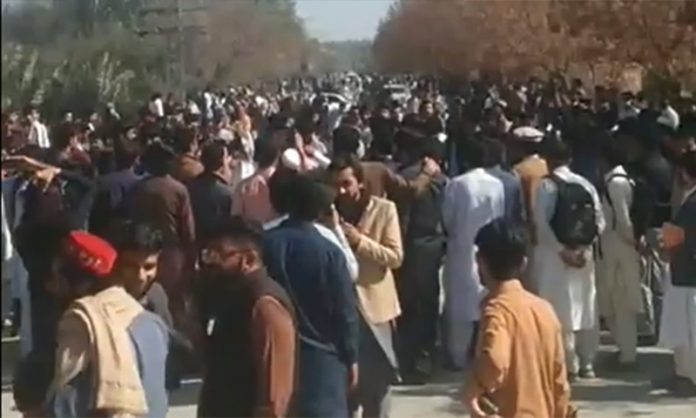 ISLAMABAD: Lawmakers from different political parties on Wednesday condemned alleged police brutality and arrest of students who have been protesting at Gomal University in Khyber Pakhtunkhwa’s Dera Ismail Khan district against the varsity administration.
In a tweet, MNA Mohsin Dawar termed police violence against peaceful protesters at the university and arrest of activists belonging to student organisations as “very condemnable” and a “shameful act”. He further called for the immediate release of those who have been arrested.
PPP’s media cell also tweeted that the party’s chairman Bilawal Bhutto-Zardari has backed the protest and stance of Gomal University students. He said that instead of solving the students’ problems, the police violence and retaliatory activities against them and the move to close the university were “unjustified”.
He also said that the valid demands of the students should be recognised and the academic process at the university resumed without delay.
The protest took a violent turn on Wednesday after nine students were arrested under Sections 147 (punishment for rioting), 149 (every member of unlawful assembly guilty of offence committed in prosecution of common object) and 341 (punishment for wrongful restraint) of the Pakistan Penal Code on the request of the university administration.
A First Information Report (FIR) against the students had been registered on February 14 after the university wrote a letter to the police requesting it to take action while a second FIR was registered on Tuesday night.
Student leader Pir Qaiser Zakori said that police on Tuesday used force and baton-charged the students who he said were protesting peacefully. He alleged that the varsity was using police to stop them from protesting.
Gomal University Deputy Registrar Zahir Shah said that “students are continuously protesting on the main roads of the city, creating a law and order situation despite the [administration’s] acceptance of 14 of the students’ 16 demands.” He added that about 25 students are creating the disturbance.
“The students demanded that the university decrease the fees from Rs36,500 to Rs30,000 which we accepted but they are still protesting.”
However, Zakori said that the university has not yet issued a notification to that effect.
Shah claimed that the protesting students had failed their exams multiple times and were now demanding “golden treatment”. He added that the students were demanding the varsity arrange special supplementary exams for them which is against the rules.