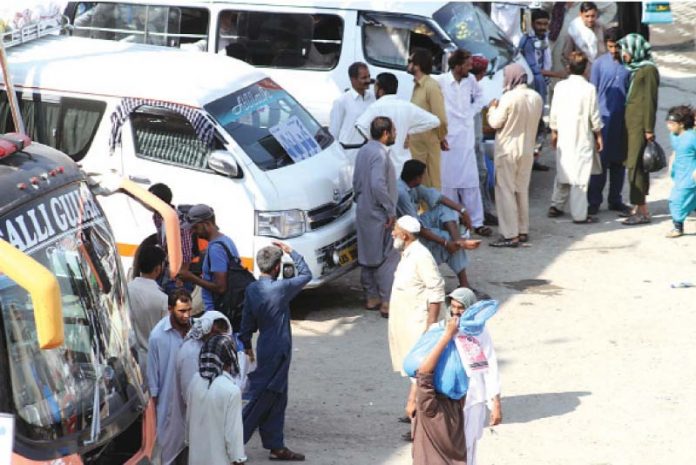 PESHAWAR: Passengers across the country, who are heading to their hometowns to celebrate Eid-ul-Fitr with their families, are perturbed by the high fares and waiting in long queues for hours at intercity terminals in different cities of the country including Peshawar.
The passengers complained that public transporters have inflated fares on the pretext of increase in petrol and diesel prices.
Despite that the government has formed teams for controlling increasing bus fares charged by bus operators, passengers have considered it as a sort of formality which has not been implemented in its true sense.
They have been asking for a reason why the government doesn’t take any action to resolve the matter.
In the scorching heat of summer, hundreds of passengers have to wait in long queues for hours before they could actually start their journeys.
Meanwhile, transporters have put the blame on the authorities of intercity terminals.
Every year during the festive seasons, passengers have to face the exploitation at the hands of public transporters.
The Pakistan Railway is running special trains to facilitate passengers in their return to their hometowns for celebrating Eid with their loved ones. A few days ago, Minister for Railways Sheikh Rasheed, in a press briefing, said that the service shall commence from June 2.
Today, a 10-bogie train has departed from Quetta to Rawalpindi. Other trains are expected to run from Karachi to Peshawar, Karachi to Lahore and Rawalpindi to Quetta.
However, passengers are undergoing severe difficulties because of rush and hassle, and long queues at train stations.