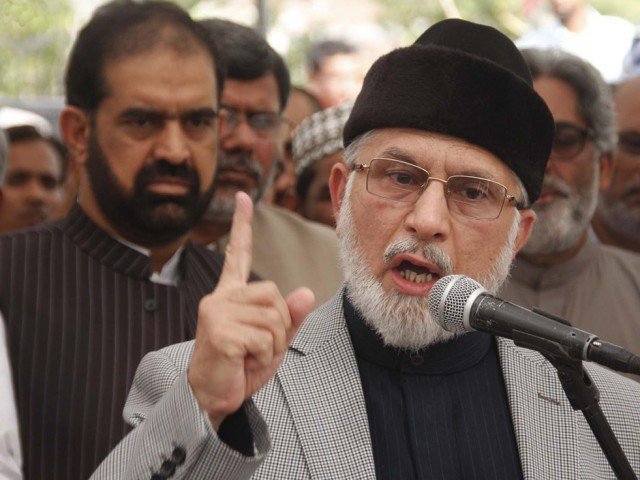 LAHORE: PAT chief Dr Tahir-ul-Qadri demanded the government release Justice Baqar Najafi’s report on the Model Town incident on Tuesday otherwise party workers would go to the provincial secretariat on Wednesday to demand it.
Pakistan Awami Tehreek (PAT) chief Dr Tahir-ul-Qadri held the federal and provincial government responsible for ensuring that Justice Baqar Najafi’s report on the Model Town incident was not published since they were held responsible for the violence in it.
Addressing a press conference after the full bench of the Lahore High Court rejected Punjab government’s appeal challenging a single bench’s decision to release the report, Qadri said that the government had not shared the report with the public on purpose.
“For three years their (PML-N) ministers used to come on TV and deny their hand in the Model Town incident,” he said. “Our party representatives asked them simply to make the report public if they were not responsible but they did not have an answer to that,” he added.
Dr Tahir-ul-Qadri said that he had not deviated from his earlier stance with regard to seeking justice on the Model Town incident. He paid tribute to his workers for being steadfast for the party’s cause and not buckling under pressure.
“I congratulate relatives of the martyrs for their patience and forbearance,” he said. “The workers who lost their lives belonged to the poorest class but they were wealthy when it came to piety and virtue,” he added.
Dr Tahir-ul-Qadri said that Nawaz Sharif, Shehbaz Sharif and other PML-N leaders would be in jail soon for the Model Town incident.
Qadri said that the court had given two decisions–one that the Baqar Najafi report be provided to those who had been affected by the Model Town incident.
“The second decision was to publish the report within one month,” he said. “The Sharifs have no option but to make the report public now,” he added.
Tahir-ul-Qadri said that if the government delayed in making the report public, it would tantamount to contempt of court. He said that if the report was not published today then the party workers of PAT would go to the provincial secretariat on Wednesday and peacefully demand the report.
“We will go to the provincial secretariat and demand the report peacefully,” he said. “We will not go from there till the government does not make the report public in line with the judgment of the Lahore High Court.