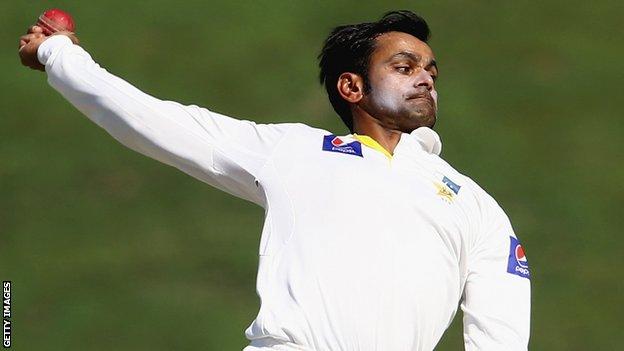 KARACHI: The Pakistan Cricket Board (PCB) have requested the International Cricket Council (ICC) to extend the deadline of  July 4 for off-spinner Muhammad Hafeez’s bowling action Test as he has not been granted visa by the Indian authorities to travel to the ICC-accredited testing centre in Chennai.
Hafeez’s action was reported after the first Test against Sri Lanka in Galle.
In accordance with the ICC rules, Hafeez can bowl in international matches until and unless the results of his tests are out.
He bowled 14 overs in the second Test even after being reported. Pakistan lost the match by seven wickets and Sri Lanka were able to level the series 1-1. The all-rounder has now travelled to Pallekele for the third Test which is scheduled to start form July 3.
“With the extraordinary circumstances, we have requested the ICC to give a new date,” Pakistan’s team manager Nadeem Akram Cheema told ESPNcricinfo.
“We have tried everything to make sure he had his test within 14 days but the visa hasn’t been granted by the Indian embassy here in Colombo.
“We have asked for another date between third Test and the ODI series.”
Hafeez, who was reported on June 21, had to appear for testing in 14 days after being reported according to the ICC regulations. He was earlier reported in November last year and then he was banned from bowling after his elbow extension was found to be beyond the legal limit of 15 degrees. He was cleared in April after going through testing in Chennai.
If Hafeez fails to clear the tests this time, he will be banned from bowling for a year because it would be the second time his action was declared illegal in last two years.