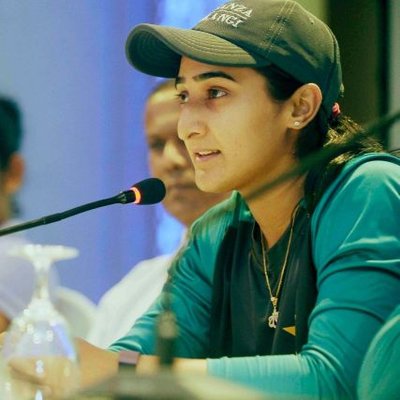 LAHORE: Bismah Maroof has been retained as captain of the women’s team till next year’s World T20 World Cup, while Iqbal Imam has been appointed as the head coach of national women’s team for the tournament scheduled to be held in Australia from February 21 to March 8, a Pakistan Cricket Board (PCB) press release said.
Maroof who has participated in 105 ODIs and 103 T20Is, was first appointed as captain in the T20I format in 2016 for the tour of England, before taking over as ODI captain post-ICC Women’s World Cup 2017. To date, she has led Pakistan in 15 ODIs and 33 T20Is.
“It is truly an honour for me to be continuing as Pakistan’s captain and I look forward to leading the side in the next year’s T20 World Cup,” said Maroof.
“The team is in good shape and has produced some good performances recently. There’s a great deal of talent and passion in the girls and I look forward to carrying the momentum to the World Cup,” she added.
Former cricketer Iqbal Imam played 147 first-class matches from 1989 to 2005 during which he scored 6,249 runs and took 136 wickets.
He was named as the batting coach in April and was made interim head coach for the recent home series against Bangladesh after Mark Coles resigned from the position.
“It is certainly an honour for me to be appointed as a head coach for the women’s side,” the batting coach said.
“Women’s cricket in Pakistan is improving day-by-day and we have a lot of talented girls emerging. Our team has gotten off to a decent start this season by beat Bangladesh in T20I series and levelling the ODI series,” he said.
Imam added, “There’s a great potential in the side to do wonders and I aim to bring the best out of them.”
Chief Selector of women’s cricket Urooj Mumtaz congratulated Maroof and said the women’s side of the sport has seen improvement over the years.
“I congratulate Bismah Maroof and Iqbal Imam on their appointments,” said Mumtaz.
“It is the dream of every cricketer to lead their nation in a world event and I am certain that Bismah is a good fit for the job. She has been at the helm for some years and she has grown as a leader,” she said.
“There has been a significant improvement in the performances of the women’s side of-late and her vast experience of international cricket is certainly going to benefit the team,” she added.
PCB Chief Executive Wasim Khan too hailed the skipper and head coach and expressed his confidence over the two to take women’s cricket to new heights.
“Bismah Maroof and Iqbal Imam have put in the hard yards to be where they are today and I am very confident that the national women’s team will thrive under them,” said Khan.
“Iqbal has been with the team since April and he understands the demands of the job. He has the desired skillset and was right up there amongst the candidates who applied for the job.
“The Pakistan team showed improvements in their T20I and ODI series against Bangladesh under him and I hope that he will be able to carry forward the momentum gained from them.”
The team’s performance will be reviewed after the ICC Women’s T20 World Cup Australia 2020 before future decisions are made as the Pakistan national women’s cricket team has no scheduled Future Tours Programme or ICC commitments until the ICC Women’s World Cup New Zealand 2021, which will be held from January 30 to February 20.