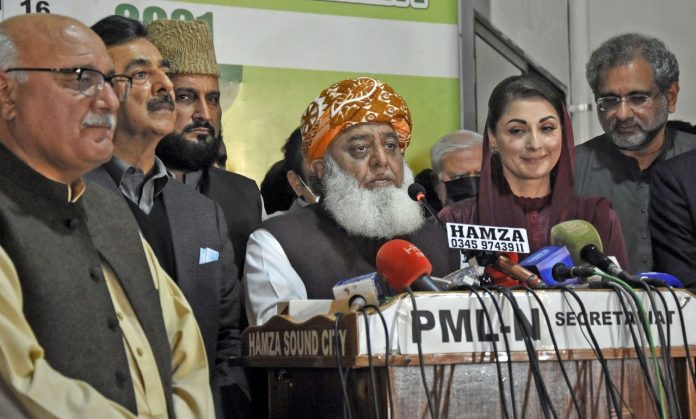 The Pakistan Democratic Movement’s long march scheduled for March 26 has been postponed amid a difference of opinion on the issue of resignations from assemblies alongside the protest.

A meeting of senior leaders of the PDM was held on Tuesday, after which Maulana Fazlur Rehman briefed the media on the outcome of deliberations held between the opposition parties.

Fazlur Rehman said that the main bone of contention between the alliance, the matter of a long march alongside mass resignations from assemblies, was discussed today. He said that PPP expressed their reservations over the two being linked and have sought time to respond.

“They will hold a meeting of the Central Executive Committee and will get back to us,” he said. “Until then, the long march must be considered postponed,” he said.

Maryam said that she does not wish for speculations to rise so will not be speaking about the time sought by PPP. She spoke, however, of PPP President Asif Ali Zardari’s remarks whereby he had asked Nawaz Sharif to return to Pakistan and reportedly said to him that the party’s resignations will only be handed in when he comes back.

She said that the “government will be dissolved, InshaAllah” and insisted a “united PDM” stands before the media. Maryam said that although Nawaz is abroad, his party is the most active in the country. “The entire party is united under his leadership, standing firm and fighting. I am Nawaz Sharif’s representative. Whosoever wishes to speak to him must first speak with me,” she added.