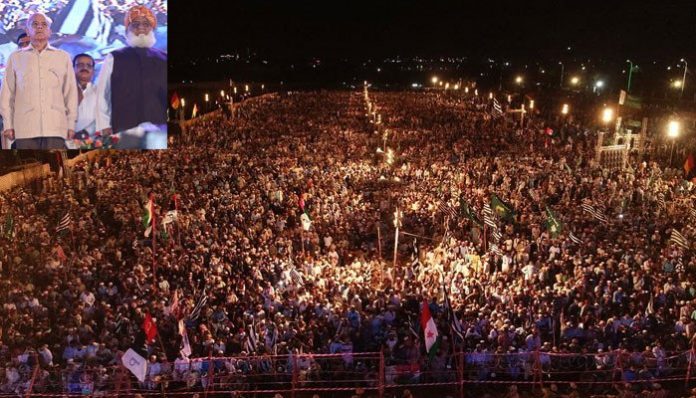 The Pakistan Democratic Movement, in its first power show in months on Sunday, at Karachi’s Bagh-e-Jinnah, declared its campaign is very much alive, and called upon the people to “rise and bring a revolution”.

The Opposition alliance said it will “bury the government with a tide of people that will storm Islamabad”. PDM chief Maulana Fazlur Rehman, who was the last to address the rally, said that the three-year performance of the PTI has revealed how the government has turned the state and the people “unsecure”.

The PDM chief said that while other nations continue to progress, Pakistan “has only regressed”.

“Of course, amid all this, we cannot sit quietly and idly by. We have sworn to raise Pakistan’s ranks among the great nations of the world,” he said.

Fazlur Rehman reiterated the movement’s stance that all governance must be in accordance with the Constitution, law and with the supremacy of parliament intact.

He said that in a household of five, when previously,” three would be employed and two unemployed, but now four are unemployed and only one employed”.

Prior to Fazlur Rehman, PML-N president and Leader of the Opposition in the National Assembly Shahbaz Sharif addressed the gathering, decrying how Karachi and Balochistan had long been left neglected.

Speaking of the addresses delivered by Baloch leaders before him, which centered around the province’s deprivations, Shahbaz said that PML-N supremo Nawaz Sharif and his party will “stand by them to get them their economic, social and legal rights”.

He recalled how “Imran Niazi” had visited Karachi in March 2019 and promised a Rs162 billion development package for Sindh, and especially Karachi.

The PML-N president said that PPP Chairman Bilawal Bhutto Zardari told him that Sindh had agreed to contribute to the package, but the province has yet to see the funds released, with the exception of a “penny here and there”.

Shahbaz said that the people are being “lulled into a false sense of security” with “false promises”.