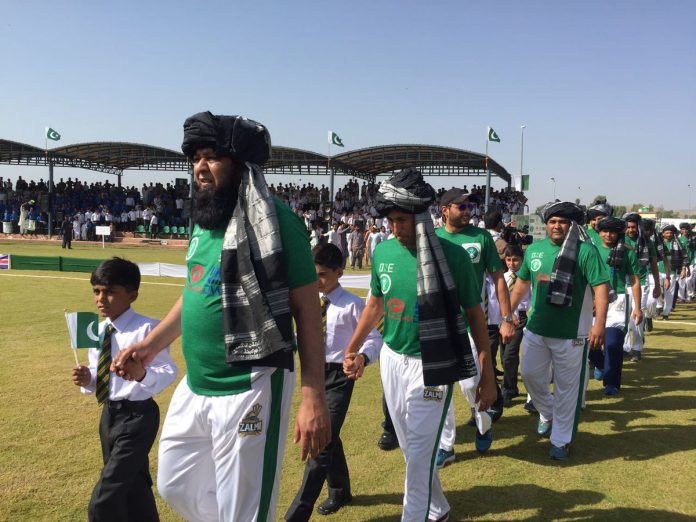 MIRANSHAH: Director-General of Inter-Services Public Relations (ISPR) said on Thursday that the hosting of Peace Cup matches will prove to the world that Pakistan is a peaceful country.
Speaking on the sidelines of the cricket match between Pakistan XI and UK Media XI in Miranshah, DG ISPR Major General Asif Ghafoor noted that life is back to normal in FATA, and residents of FATA have all facilities available to them.
DG ISPR vowed that terrorism will never be allowed to regain stronghold in the region again.
He further said that the process of rehabilitation of the internally displaced people has almost been completed.
Corps Commander Peshawar Nazir Ahmed Butt was also present at the stadium, along with other dignitaries. Governor Khyber-Pakhtunkhwa Iqbal Zafar Jhagra is the chief guest of the occasion.
Pakistan XI captain Inzamam-ul-Haq, prior to the match, said the tournament would send a message of peaceful Pakistan to the rest of the world.
Hailing the successful hosting of World XI, the former captain and current chief selector expressed hope that international cricket would soon return to Pakistan.
The match, being played at the picturesque Younis Khan Stadium in Miranshah, is part of a series titled Peace Cup, organised by the Pakistan Army, Pakistan Cricket Board and PSL franchise Peshawar Zalmi.
Prominent players in action include Inzamam ul Haq, Shahid Afridi, Younis Khan, Kamran Akmal, Junaid Khan, Umer Gul and Mushtaq Ahmed.
The UK team, on the other hand, is part of an 18-member group of journalists, lawyers, businessmen and academics aged between 21-62, which is touring Pakistan with the aim to improve the country’s image as a sporting nation.