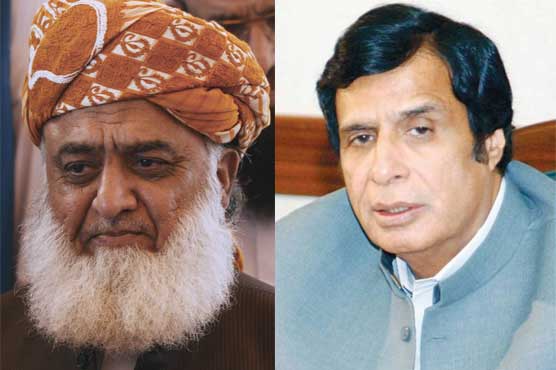 ISLAMABAD: Member of government’s negotiation team and speaker Punjab Assembly Pervaiz Elahi on Sunday contacted JUI-F chief Maulana Fazlur Rehman and appealed him to solve the issues through talks.
Pervaiz Elahi made a contact with Maulana Fazlur Rehman to discuss the sit-in of JUI-F and Maulana gave a positive signal. Efforts are being made to resolve all issues of sit-in through mutual understanding.
On the other hand an important meeting of JUI-F was held under the chair of Maulana Fazlur Rehman to discuss matters related to Azadi March.
The meeting pondered over the suggestions of Rehbar Committee. Sources said Rehbar Committee of opposition had suggested collective resignations and shutter down strikes.
The government’s negotiation committee also met to discuss the matters as the deadline of JUI-F chief for demands ends today.
The meeting discussed future strategy and re negotiations with opposition. Sources said government is waiting for Maulana Fazl’s address and situation would be clearer after that.
The committee members hoped that JUI-F will stick to the agreement and no undemocratic show would be displayed.