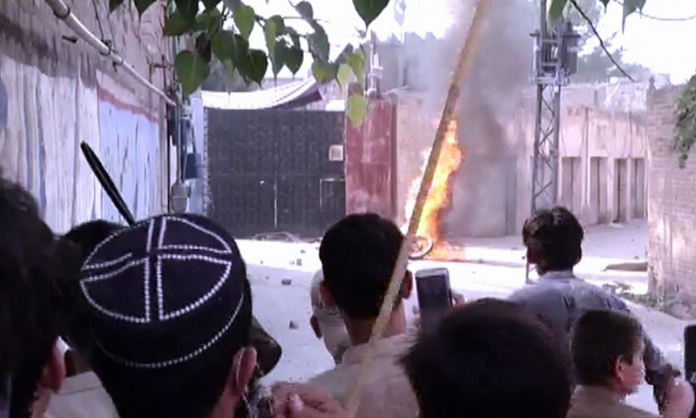 PESHAWAR: Protests erupted in Peshawar on Friday for a second consecutive day as citizens took to the streets against police brutality, days after a video surfaced on social media showing Khyber Pakhtunkhwa police abusing and stripping a man naked while filming the ordeal.
A large number of protesters gathered outside Tehkal Police Station — where the incident took place — shouting slogans against officials and attacked the main gate by pelting it with stones. The protesters also caused damage to CCTV cameras in the vicinity and set a motorcycle alight.
SP Saddar Circle A S Khalid said that the situation was brought under control shortly after protesters gathered.
“Some youngsters were trying to disturb law and order,” he said. Officials used tear gas to disperse the protesters, who were later spotted rinsing their eyes and face with water.
“We are protesting to demand justice for the victim,” said 20-year-old Ahmed Khan.
Protesters also gathered outside the provincial assembly’s building and staged a demonstration against police torture. Officials used tear gas to disperse the protesters.
SP Khalid added that a separate protest was also held outside Town Police Station, in which a large number of workers from different political parties participated. The protest was peaceful, he said, adding that officials were there to control the situation.
On Wednesday, three policemen were arrested and booked for assault and other charges after a video showing them abusing and stripping a man — identified as a 30-year-old Afghan national who currently resides in Peshawar’s Tehkal area.
The incident apparently occurred a week after the victim uttered profanities against police high-ups, including the inspector general and senior superintendent of police, in a video that was uploaded to social media.
In the video showing the abuse, police personnel were heard forcing the man to apologise. A third video shot separately showed the man apologising for using abusive language against police officers and saying he will not repeat this.
The next day, hundreds of protesters, mostly from Tehkal area, took to the streets.
Protesters gathered in front of the Peshawar Press Club building and blocked the Sher Shah Suri Road, burned old tyres and shouted slogans against police brutality. Later, some of them walked to Surey Pul Chowk in front of the provincial assembly’s building, where they were joined by a large group of protesters from Tehkal area.
There followed clashes between the police and protesters. The police used tear gas and baton charge to disperse the mob, while the protesters retaliated by throwing stones.
Following public outrage, the provincial government announced the holding of a probe into the incident through a Peshawar High Court judge.
Adviser to KP CM Ajmal Wazir said a judge would be notified for the probe in consultation with the high court’s chief justice.
“The probe will be completed within a fortnight, while its report will be made public within a month. The government will not spare anyone responsible for the incident,” he said.
Ajmal said four police officials, including the station house officer of Tehkal area, had been suspended before three of them were arrested, while an FIR had been registered against SHO as well.