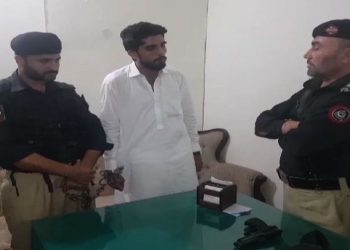 PESHAWAR: A man has been arrested after a video of him firing aerial shots on Peshawar’s University Road went viral.
The suspect, identified as Harris, had blocked the road after firing aerial shots.
The police used the video to identify an arrest the suspect. They said that the suspect is a student at an agriculture university.
Harris, in a statement, accepted his mistake. He remarked that he is ashamed of his conduct and asked other people from engaging in such acts.