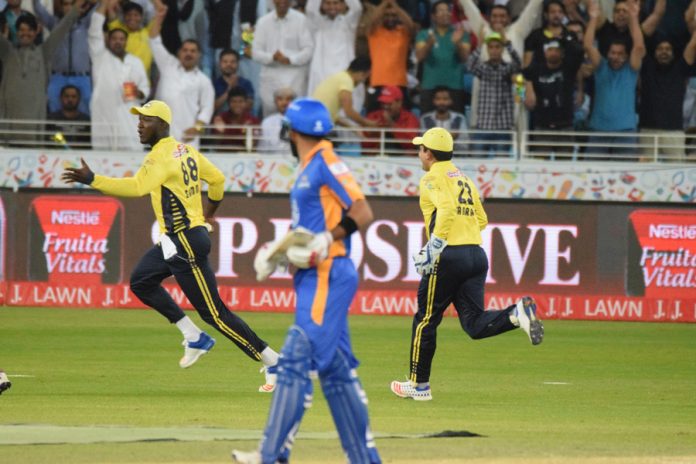 SHARJAH: When the going gets tough, the tough get going. With their backs against the wall, Peshawar Zalmi gave their best performance in season 3 of HBL Pakistan Super League as they thrashed Karachi Kings by 44 runs to stay alive in the competition.
Facing a must-win situation, the defending champions were propelled by a match-winning knock by Kamran Akmal, who hammered a 51-ball to 75, as they put on a formidable total of 181-6. Peshawar’s cause was helped by a stunning display of power-hitting by Darren Sammy and Saad Nasim in the final overs.
In their run-chase, Karachi kept losing wickets at regular intervals and failed to come even close despite a 50-ball 66 from Babar Azam, one of the leading scorers of PSL 3. Apart from him and veteran Shahid Afridi (26 off 8 balls), no Karachi batsman was able to counter Peshawar’s fiery bowling attack that was lifted by a rejuvenated Hasan Ali, who finished with 1-20. Wahab Riaz also regained his form with figures of 2-26 but the real bowling hero was spinner Liam Dawson who took 3-17 from his four overs. Umaid Asif finished with 2-23.
Earlier, Peshawar’s batting clicked when it mattered the most even though they lost senior batsman Mohammad Hafeez in the very first over. Usman Shinwari scalped Hafeez on the third ball of the match but Kamran and Dwayne Smith (15 off 16 balls) put the innings on track.
Shahid Afridi cleaned up Smith in the 8th over. Peshawar remained cautious with Riki Wessels scoring (11 of 14). It was only after Saad Nasim joined Kamran that the real fireworks began. Saad smashed 35 of 18 balls as he continued to milk Karachi bowlers in an electric stand with Sammy. Saad hit two sixes and four fours. Sammy was in an even more explosive form as he smashed four sixes in his unbeaten 36 that came off just 15 balls. Between 16.3 to 17.3 overs, 38 runs were scored as Sammy hit three consecutive sixes off Mohammad Irfan Jr and later Saad smashed Mohammad Amir for a series of boundaries.
Peshawar score 50 runs in three overs from 17-19. 28 runs were scored in the 17th over bowler by Irfan.
Shinwari was the only success story in Karachi’s bowling attack that was blown to pieces by the trio of Kamran, Saad and Sammy. The pacer finished with 3-11 from four overs.
With the victory, Peshawar stayed in the hunt for a place in the playoffs. They have eight points and just need to beat Lahore Qalandars in their final league match on Friday here at the Sharjah Cricket Stadium on Friday to progress to next stage of the competition.
Zalmi can even finish as one of the top-two teams and play Sunday’s Qualifier in Dubai if they win big against Lahore.
Karachi stay at the third place and a win against Islamabad United on Friday will see them through.