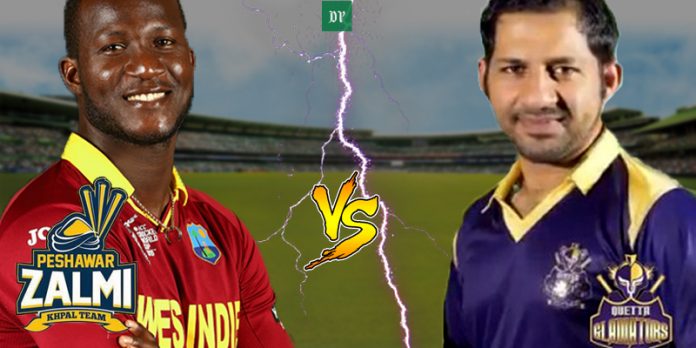 LAHORE: Reigning champions Peshawar Zalmi are all set to face two-time finalists Quetta Gladiators in the second playoff of the Pakistan Super League (PSL) 2018 here at Lahore Gaddafi Stadium today (Tuesday). The high-voltage match will begin at 7PM PST.
The winner of the match will play third playoff with Karachi Kings at National Stadium, Karachi while the losing team will be knocked out of the tournament.
All foreign players of Peshawar Zalmi including skipper Darren Sammy, Liam Dawson, Rikki Wessels, Chris Jordan, Tamim Iqbal and Ander Fletcher will land in Lahore tomorrow at 1:40AM respectively. However, Dwayne Smith has fled back to West Indies owing to family reasons.
A famine of foreign players has once again struck Sarfraz-XI as their two key players—Kevin Pieterson and Shane Watson—have refused to visit Pakistan. However; the South African hard-hitter Rilee Rossouw changed his mind at the last moment and announced to join the Gladiators’ squad tomorrow.
In the league stage, both teams faced each other twice and won one each respectively.
The senior Akmal is in sublime form and will be key figure for Zalmi, be it their first innings or second innings. He is also the only century-maker of PSL 2018 thus far. With batting average of 43.37 in the ongoing season at impressive strike-rate of 145.79, the senior Akmal will be the player to look out for.