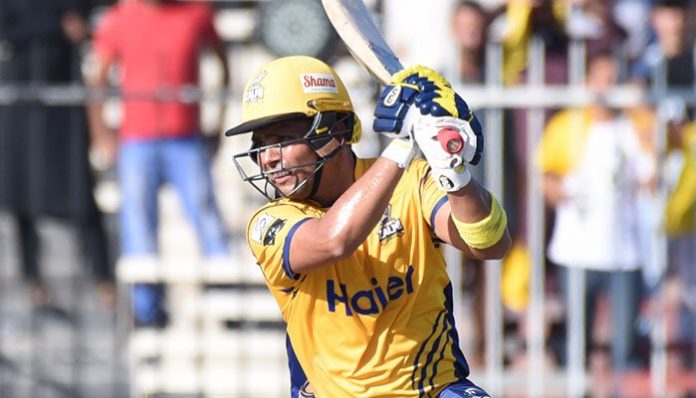 SHARJAH: Kamran Akmal’s ruthless 75 off 51 balls catapulted Peshawar Zalmi to 181 in their must-win game against Karachi Kings at the Sharjah Cricket Stadium on Thursday.
Peshawar lost opener Mohammad Hafeez to a duck in the second over of the inning, after Darren Sammy won the toss and opted to bat. Shahid Afridi ended Dwayne Smith’s inning at 15 to leave Peshawar at 47-2.
K Akmal, however, showed no mercy to the opponent bowlers, bringing up his 50 from 38 balls. He was dismissed by Usman Khan Shinwari after he holed out to Bopara in the deep.
Saad Nasim, along with skipper Sammy, kept up the run rate before getting bowled by Usman Shinwari for 35 off 18. Liam Dawson was dismissed off the last ball of the inning, leaving Peshawar with 181-6 on the scoreboard.
Usman Khan Shinwari remained largely immune to the big-hitting, finishing with bowling figures of 4-0-11-3.
Peshawar, with only three wins in their eight games so far, are dangerously close to elimination: they need to win both of their remaining two games in order to progress to the playoffs.
If Karachi beat Peshawar today, then the line-up for the playoffs and eliminators will be completed: Islamabad United, Quetta Gladiators, Multan Sultans and Karachi Kings will be through.
But if Peshawar win today, then Karachi and Multan will have to wait until Peshawar’s next match against Lahore on Friday.
If Peshawar win on Friday as well, they will reach the playoffs, leaving Karachi and Multan to wait for the result of the last league match of this PSL: Islamabad United vs Karachi Kings.
It will be advantage Karachi: if they win, they’re through. Even if they don’t, they’ll have to try their best to score as much as possible to be able to surpass Multan on NRR, as a Karachi defeat scenario would see them tied with Multan with 9 points each.