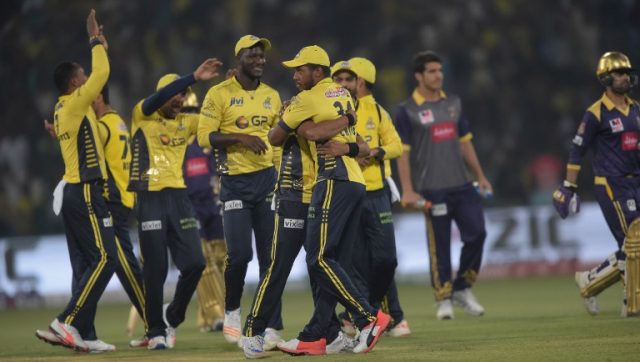 DUBAI: Peshawar Zalmi will take on Quetta Gladiators in the Pakistan Super League (PSL 3) at the Dubai International Cricket Stadium tonight.
Quetta beat Multan Sultans in a dramatic chase on Wednesday, driven home by a sensational 6 from Hassan Khan which snatched the game away from the opponents.
Sarfraz Ahmed’s men then demolished Karachi Kings by a record-breaking 67 runs – the largest run margin victory in PSL history.
Quetta are at third place on the points table, with 4 wins and 3 losses.
Peshawar, in contrast, have gone downhill after a decent start to the season. Plagued by injuries and absence of notable foreign players such as Tamim Iqbal (who left earlier to join national duty), the team is at fifth spot with 3 wins and 4 losses.