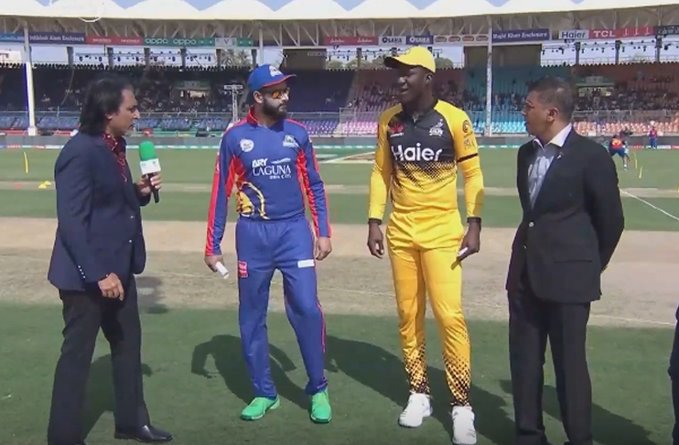 KARACHI: Peshawar Zalmi has won the toss and decided to field first in the second match of HBL PSL at the National Stadium in Karachi.
Peshawar Zalmi are one-time winners of the PSL, as they won the coveted PSL trophy in the second edition – in 2017, whereas they have been the runners-up for the last two consecutive years – in 2018 and 2019.
On the other side, Karachi Kings have not been able to win the tournament nor have they ever been the runners-up. They achieved the fourth position in the first and the fourth editions – in 2016 and 2019 and were placed third in two successive editions – 2017 and 2018.
In today’s match, both teams are balanced, but the Zalmi are looking a better side on the basis of their past performance, with one trophy and two second spots in the tournament.
Addressing a press conference before the match, captains of both sides expressed their confidence of getting off to a winning start.
“The pitches in Pakistan create a lot of excitement and I see the best bowling team will win this tournament,” said Sammy.
“No doubt Peshawar are a very good side but we also have a solid combination and we will try to deliver tomorrow,” Imad told a news conference on Thursday.
Karachi Kings: Chadwick Walton, Babar Azam, Sharjeel Khan, Iftikhar Ahmed, Cameron Delport, Mohammad Rizwan, Imad Wasim, Umaid Asif, Mohammad Amir, Chris Jordan and Arshad Iqbal.
Peshawar Zalmi: Tom Banton, Liam Livingstone, Kamran Akmal, Haider Ali, Mohammad Mohsin, Shoaib Malik, Darren Sammy, Liam Dawson, Wahab Riaz, Hasan Ali and Rahat Ali.