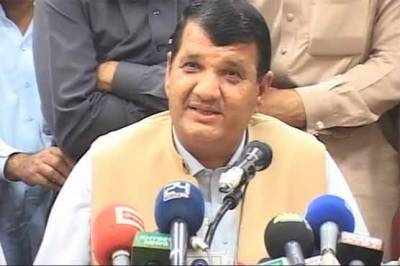 PESHAWAR: The Peshawar High Court (PHC) has extended bail before arrest of Pakistan Muslim League-Nawaz (PML-N) leader, Engineer Ameer Muqam till September 3, in charges of possessing assets beyond known means of income.
Muqam’s counsel and the National Accountability Bureau’s (NAB) prosecutor appeared before the court.
At the outset of the hearing, the PML-N stalwart lawyer pleaded the court to extend bail before arrest of his client. Latter, the PHC extended bail before the arrest of Muqam till September 3 and adjourned the hearing.
The NAB has accused Muqam of purchasing properties in Islamabad, Lahore and Peshawar. He is also accused of purchasing precious agricultural land in Swat, Shangla and Peshawar, besides having several bank accounts.
Muqam’s wealth and luxurious lifestyle do not match his known income and that is why investigation against him was initiated, said officials privy to the matter.
The NAB KP started the inquiry against Ameer Muqam in July last year, after orders of the NAB Chairman Justice (Retd) Javed Iqbal.
Engineer Ameer Muqam is President of PML-N Khyber Pakhtunkhwa. He has previously served as adviser to the prime minister. He had contested the July 25 election from two National Assembly and two provincial assembly seats on the PML-N ticket but lost all four.