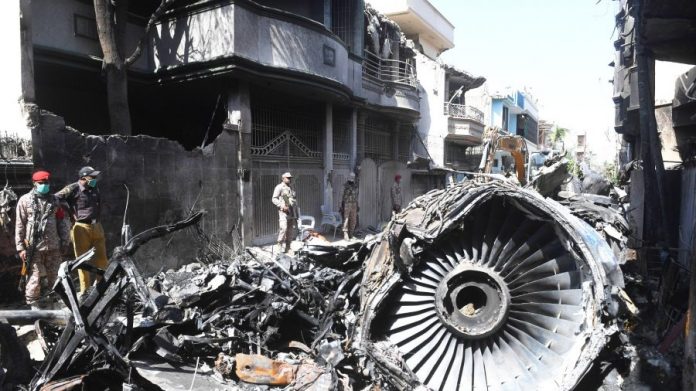 ISLAMABAD: The head of the investigation board, Usman Ghani, has returned Pakistan from Paris with evidence of the crashed Pakistan International Airlines (PIA) plane PK-8303.
The French experts probing into causes of the PIA’s Airbus 320 crash in Karachi have handed over the black box of the aircraft to Air Commodore Usman Ghani, the head of the investigation board, after decoding it.
Ghani will submit its ‘evidence and investigation report’ to the aviation division within a few days, said sources, adding that the experts collected key information during the probe of the cockpit voice recorder.
Due to the non-availability of flight to Pakistan from Paris, Usman Ghani flew to Germany to travel through a special flight of the national flag-carrier, PK-8734, scheduled between Frankfurt to Islamabad.
Earlier on Saturday, it emerged that the investigation of Pakistan International Airlines (PIA) plane crash investigation had stepped forward after the French experts submitted decoded black box data of the ill-fated flight PK-8303 to Pakistan.
Along with the black box, flight data recorder and cockpit voice recorder were also handed over to the head of Pakistan’s investigative board.