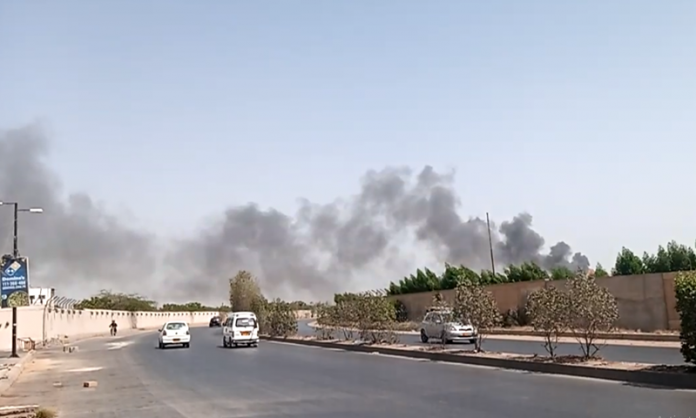 KARACHI: A Pakistan International Airlines (PIA) aircraft A320 Airbus on Friday crashed in Model Colony near Jinnah international airport Karachi.
PIA spokesperson Abdullah Hafeez confirmed the crash and added that PK 8303 was carrying 90 passengers and 8 crew members from Lahore to Karachi. Director Programming 24 News Ansar Naqvi was among the passengers.
Bank of Punjab President Zafar Masood was also onboard.
“Saying anything right now would be premature. Our crew is trained to handle emergency landings. All my prayers are with the families. We will continue to provide information in a transparent manner,” said Hafeez.
PIA Chief Executive Officer Air Marshal Arshad Malik, who has left for Karachi, said the pilot told the control room that there was a technical issue and he decided to go around rather than land even though two runways were ready for landing.
Sindh Governor Imran Ismail said the plane fell in a populated area. “The concern now is of casualties of people in the area. Rangers and rescue services have been sent, we are trying to save as many lives as possible.”
Footage showed plumes of smoke rising from the site of the crash. Ambulances and rescue officials arrived at the scene to help residents.
Chief of Army Staff (COAS) Gen Qamar Javed Bajwa condoled “loss of precious lives”. “[COAS] Shares grief of bereaved families in this difficult time. COAS directed provision of full assistance to civil administration in rescue/ relief effort,” said Inter-Services Public Relations (ISPR).
A statement by ISPR said Army Quick Reaction Force and Sindh Pakistan Rangers reached the site for relief and rescue efforts alongside civil administration.
Minister of Health & Population Welfare has declared emergency in all major hospitals of Karachi due to the plane crash, according to Meeran Yousuf, the media coordinator to the Sindh health minister.
SAPM on Information and broadcasting Asim Saleem Bajwa said that on Prime Minister Imran Khan’s directions, all emergency services and resources have been mobilised and evacuation is in progress.
Chief Marshal Mujahid Anwar Khan, Chief of the Air Staff, Pakistan Air Force expressed grief over the tragic air crash. He further said that PAF stands by PIA at this difficult time and extends all out support in the rescue operation.
Federal Aviation Minister Ghulam Sarwar also expressed deep grief and sadness over the incident and has ordered the Aircraft Accident Investigation Board to conduct an “immediate inquiry” into the crash.
Federal Information Minister Shibli Faraz called it an “extremely saddening accident”.
“We are with the affected families in their grief. The primary attention is on relief activities right now.”
Last year, a PIA aircraft escaped accident after it skidded off the runway while landing at Gilgit airport.
Passengers had remained safe in the accident, but the plane suffered considerable damage.
In 2016, PIA flight PK-661 carrying 48 passengers and crew had crashed on the way to Islamabad from Chitral on December 7. There were no survivors from the ill-fated flight.