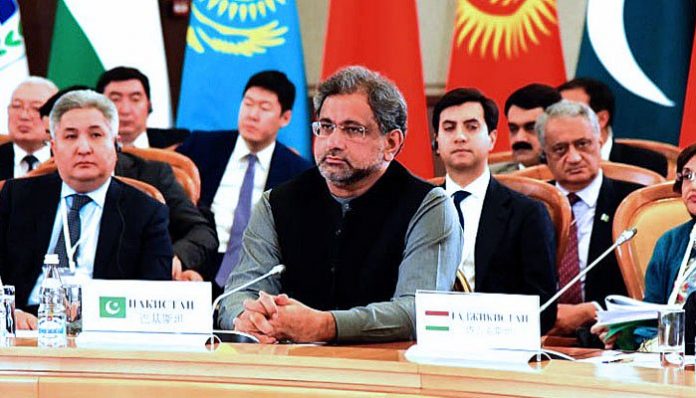 SOCHI: Prime Minister Shahid Khaqan Abbasi has stressed upon the Shanghai Cooperation Organization’s (SCO) member countries to fully harness their true potential “for our mutual advantage”, owing to the vast connectivity and economic prospects.
“Today, we are witnessing a historic opportunity for the SCO to truly have a trans-continental reach. In the coming decades, it would emerge as an important global geopolitical and geo-economic force,” he said.
Abbasi also cautioned against the politicization of economic development and connectivity projects since such a myopic approach would only hold back the collective progress.
“Let us harness the SCO’s potential and competencies for our mutual advantage. We stand ready to contribute to this collective endeavour,” he added.
In a statement during the meeting of the SCO’s Council of Heads of Government (CHG), the premier said Pakistan — having assumed full membership of the Organization — was set to bring more vitality with possessed tremendous potential for global, regional trade, and economic activities.
Abbasi said the SCO held tremendous potential for connectivity, trade, energy, and economic development. It could lead to progress and prosperity of the entire region, he explained.
“With a consumer market of over 200 million people, vast business potential, and a rapidly modernizing infrastructure, Pakistan offers the SCO enormous opportunities for mutually beneficial cooperation.
Pakistan’s deep historical and cultural ties, as well as strong economic and strategic links with the SCO members, can act as an enabler in realizing the SCO’s vision,” he added.
The prime minister said trade and economic cooperation held the key to the SCO region’s long-term stability, progress and prosperity.
The China-Pakistan Economic Corridor (CPEC) — which is the pioneering project of the Belt and Road Initiative — complements the SCO’s vision of connectivity and economic integration, Abbasi stated.
He said that Pakistan wanted to see the CPEC connected to the six main trade corridors of the SCO as it would help fulfil the long-cherished aspiration for land and maritime connectivity between Europe, Central Asia, China, and South Asia.
Pakistan, he added, was also pursuing projects such as CASA 1000 and TAPI Pipeline Project to promote regional energy connectivity.
Abbasi said the world was going through a profound transformation marked by an eastward shift of the global development potential.
Coinciding with this change, he said, the SCO was creating a new imprint on the global international order.
“The ‘Shanghai Spirit’ — as enshrined in the SCO Charter and the Treaty on long-term neighbourliness, friendship, and cooperation — is our guiding principle.
It can help promote our shared vision of mutual trust, mutual benefit, equality, respect for cultural diversity, and the pursuit of common development,” he added.
He said the SCO should continue to contribute towards building a just and rational world order based on the UN Charter principles of respect for international law and non-interference in each other’s internal affairs.– APP