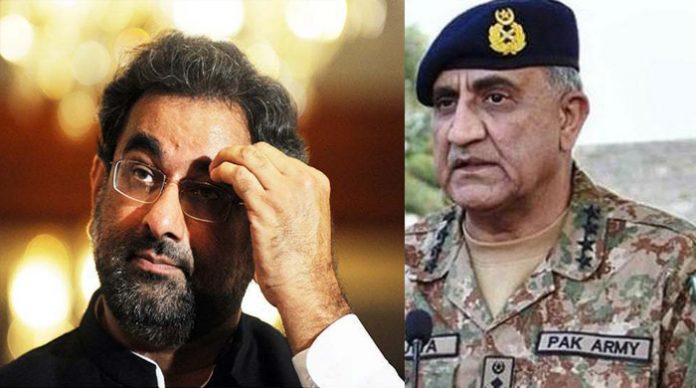 ISLAMABAD: An important meeting is expected between Prime Minister Shahid Khaqan Abbasi and Cheif of Army Staff (COAS) General Qamar Javed Bajwa to discuss the Faizabad Interchange situation.
Accoding to media reports, the Army Chief cut shot his visit to the United Arab Emirates (UAE) and returned Pakistan last night.
The reports added that the Army Chief and Prime Minister would take stock of the current situation after local administration failed to disperse the protesters from the Interchange.
On Saturday, the interior ministry issued a notification for the deployment of army in the capital to check violence and mass protests that ensued security operation launched by the federal government to end sit-in of religious parties against a controversial amendment in Elections Act 2017.
Issuance of the notification has come in less than 24 hours after police contingents began to coercively clear Faizabad Interchange and surroundings where protesters had camped in late October.
Deployment of sufficient number of troops of Pak Army is to be determined by the Commander 111 Brigade, the notification reads.
However, Pakistan Army said while its troops were fully ready to perform the assigned task in line with its institutional obligations; however, there were few aspects needed to be discussed prior to the deployment.
The Army said that the police force had not been optimally utilized to its full capability in dealing with the protestors adding that Pakistan Rangers had also not been given written instructions as agreed for their employment.
The Army added that its troops were traditionally not just used for dispersal of crowd amd protestors but to quell the commotion.
It should be noted here that the amendment was reversed following the controversy however, the protesters are adamant to have law minister Zahid Hamid resigned so much so that during the clashes on Saturday in multiple cities, Member of National Assembly (MNA) Mian Javed Latif was wounded while a local was killed in tensions outside former interior minister Chaudhry Nisar’s residence.