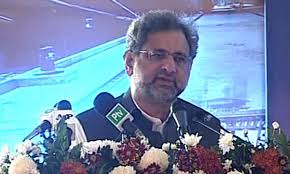 MIANWALI: Prime Minister Shahid Khaqan Abbasi inaugurates gas supply project costing 2.30 billion rupees in Mianwali today (Saturday).
The project will provide gas to the people of tehsil Esa Khel and its adjoining areas.
Over one hundred and eighty thousand people will benefit from it.
Later addressing a public gathering in Mianwali today (Saturday) the Prime Minister Shahid Khaqan Abbasi said democracy is imperative to take forward the country.
He said the PML (N) government will return to power after July 2018 general elections and take forward the process of development.
Shahid Khaqan Abbasi said the PML (N) believes in the politics of decency and serving the masses.
About the upcoming Senate elections, the Prime Minister said horse trading is not in the interest of the country. He said we will expose those who are doing dirty politics.
Talking about development projects, the Prime Minister pointed out the PML-N government started and completed unprecedented projects in different fields including road infrastructure, gas and power.
He said despite all challenges including political conspiracies, the present government delivered.
Shahid Khaqan Abbasi said today gas is available to all the consumers including the CNG users. He said new gas connections are also being given.
The Prime Minister said the motorway being constructed between Hassan Abdal and Dera Ismail Khan will greatly benefit the people of Mianwali. He said it will change the destiny of the people of the area.
Shahid Khaqan Abbasi said the Punjab province under the leadership of Shahbaz Sharif has witnessed unmatched development.