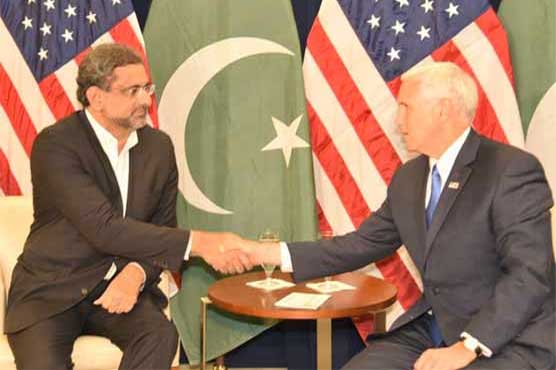 NEW YORK: Prime Minister Shahid Khaqan Abbasi met Turkish President Recep Tayyip Erdogan on the sidelines of the United Nations General Assembly (UNGA) session in New York on Tuesday.
The two leaders exchanged views about the strengthening of bilateral relations and also reviewed regional peace and security situation.
They also exchanged views on the regional situation. On the efforts for peace and stability in Afghanistan, both the leader agreed that there was no military solution to the Afghan conflict. They also agreed that efforts should continue for a regional approach for an internal political settlement in Afghanistan through an Afghan-owned and Afghan-led peace process.

They agreed upon the revival of the Pakistan-Afghanistan-Turkey Trilateral process for promoting lasting peace and stability in Afghanistan.
Discussing the plight of Rohingya Muslims, President Erdogan and Prime Minister Shahid Khaqan Abbasi urged the international community and the OIC to take urgent measures to alleviate the suffering of these people.
PM Abbasi said that Pakistan and Turkey extended support to each other on the issues of their vital national interests. The Prime Minister thanked the Turkish President for Turkey’s unflinching support to the struggle of the people of Indian occupied Jammu and Kashmir.
The two leaders also discussed ways to enhance economic cooperation and agreed to work together for early finalization of the Free Trade Agreement for boosting their bilateral trade.
Prime Minister Shahid Khaqan also met with US Vice President Mike Pence on the sidelines of the United Nations General Assembly (UNGA) session in New York.
PM Abbasi discussed various issues with Mike Pence including the recent trump statement regarding Pakistan in the perspective of US policy about Afghanistan and South Asia Region. 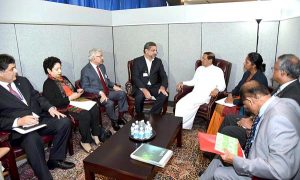 Earlier, Prime Minister Shahid Khaqan Abbasi and President of Sri Lanka Maithripala Sirisena met here the on the sidelines of the 72nd session of the United Nations General Assembly.
Pakistan and Sri Lanka while noting their huge potential for deeper and broader ties in defence, trade and economic ties decided both the countries need to explore new avenues for enhanced cooperation.
The leaders of Pakistan and Sri Lanka reiterated the deep and historic relations between the two countries and vowed to further strengthen their bonds of friendship.
It was also agreed that both the countries would continue to cooperate at all multilateral forums in the spirit of neighborhood and longstanding relationships which were rooted in history, a statement from the PM Media Office said.