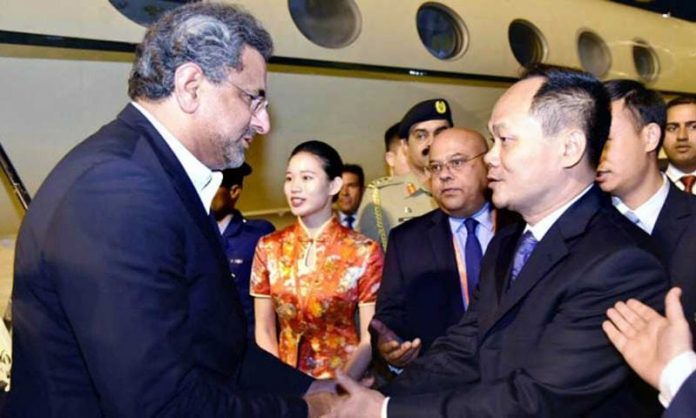 BEIJING: Prime Minister Shahid Khaqan Abbasi and seniors members of his cabinet on Sunday touched down in China to attend the Boao Forum Annual Conference for Asia.
The Prime Minister, who is accompanied by Foreign Minister Khawaja Asif and Interior Minister Ahsan Iqbal, will deliver his speech on Tuesday.
Chinese President Xi Jinping, Philippines President Rodrigo Duterte, Netherlands Prime Minister Mark Rutte and other global leaders are also scheduled to make an appearance at the conference, which is being held in South China’s island province of Hainan.
PM Abbasi is also expected to hold meetings with the regional and global leaders in attendance.
The Boao conference is modeled after the World Economic Forum and is sometimes referred to as the Asian Davos.
The theme of this year’s conference is “An open and innovative Asia for a world of greater prosperity”. Participants will be expected to discuss key issues related to globalisation, the Belt and Road Initiative and innovation.
According to experts, the Boao forum will be a platform for global political and business leaders to share insights on China’s economy, the B&R Initiative and fostering innovation, which will be the fundamental drivers for the creation of new growth engines for the world economy.