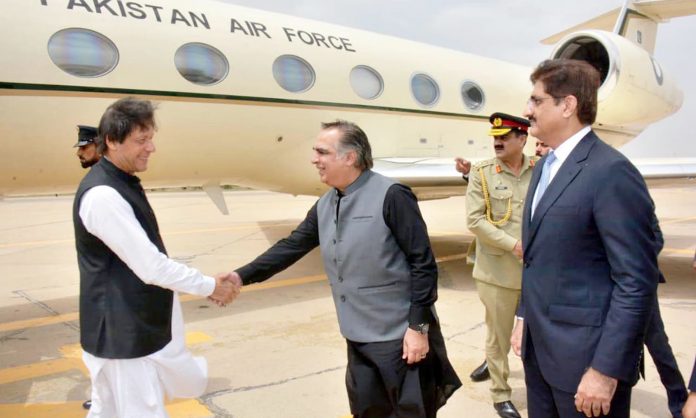 SUKKUR: Prime Minister Imran Khan on Friday announced a massive Rs440 billion package for 14 under-developed districts of Sindh, saying the effects of the investment will be visible within a month.

His remarks came as he addressed a ceremony in connection with the government’s flagship Kamyab Jawan initiative in Sukkur this afternoon.

Earlier, the premier arrived in the city on a day’s trip and is also scheduled to visit Karachi where he will meet with top government and public representatives.

“Sindh has always been deprived of the basic facilities, while the underprivileged have had no rights,” said the prime minister.

“If we can equip the youth with skills and education, we can turn them into an asset for the country,” he added.

Referring to Covid-19 lockdowns, the prime minister said, “We didn’t shut down the country following the Covid-19 outbreak, as was the case with several developed countries, and reaped the benefits”.

Imran regretted that the Sindh government had cancelled the NOC for an island of Karachi’s coast, saying the investment on the island could benefit the people of the province.

“I urge the Sindh government to review its decision so that the returns from the island could uplift Sindh’s economic status.”

“I represent every province of Pakistan; no part of the country is to witness less development than the other” he maintained.

Aimed at the socio-economic development of the districts, the package envisages the construction of Nai Gaj dam for the irrigation of 28,800 acres of land and the 306-kilometre long Sukkur-Hyderabad motorway.

Under the scheme, rehabilitation of 200,000 acres of land will provide livelihood opportunities for the people.

As part of the education reforms, the ratio of higher education will be brought to 52 per cent. Moreover 14 passport offices will also be upgraded under the package.

On Friday, Fawad Chaudhry said that the amount would be in addition to Rs1,100 billion of the Karachi package.

He also said that the next two years would be the years of development as the PTI government was taking all possible steps to end a sense of deprivation among the people of Sindh.