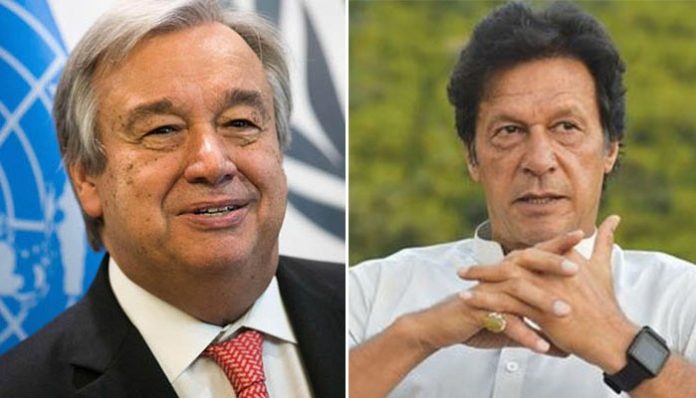 ISLAMABAD: Prime Minister Imran Khan has urged the United Nations Secretary General to take the notice of grave human rights violations in Indian occupied Kashmir.
He expressed his concern during a telephonic conversation with UN Secretary General Antonio Guterres on Thursday.
The Prime Minister also underscored UN’s role to end human rights violations being perpetrated by occupied Indian forces against Kasmiris.
Earlier, while urging the world community to “intervene” and stop ongoing bloodshed in India-held Kashmir, Foreign Minister Shah Mehmood Qureshi had asked the Organisation of Islamic Cooperation (OIC) to immediately convene an inter-ministerial meeting of its Contact Group on Kashmir, saying Pakistan is ready to host the event.
Qureshi said he had contacted the OIC secretary general to apprise him about the latest situation in occupied Kashmir and Pakistan’s desire for convening of the meeting of the member states in Islamabad.
Qureshi said he had told the OIC secretary general that the proposed meeting could also be held in Jeddah, if the participants had any difficulty in travelling to Islamabad. According to the minister, the OIC secretary general responded positively and asked him to submit a formal request.
Condemning the killing of 14 Kashmiris by Indian forces in Pulwama, he said, “It appears Indian forces are on killing spree. The forces are not resorting to aerial firing to quell protests and disperse crowds. The yesterday’s events show that their aim is to kill.”
Prime Minister Imran Khan through his official account on Twitter also condemned the killings of innocent civilians at the hands of Indian forces in the Pulwama area.
“(I) strongly condemn killing of innocent Kashmiri civilians in Pulwama IoK by Indian security forces. Only dialogue and not violence and killings will resolve this conflict. We will raise issue of India’s human rights violations in IoK and demand the UNSC fulfill its J&K plebiscite commitment,” Mr Khan tweeted. “Kashmiris must be allowed to decide their future,” he said.
Qureshi said he was also sending letters to the secretaries general of the United Nations and the UN Human Rights Commission drawing their attention to recent surge in the acts of barbarism and brutalities by Indian forces against innocent and unarmed Kashmiri people. He called upon the international community and human rights organisations to take notice of the ongoing killing spree by the occupation forces in held Kashmir.
Hoping the world would not remain silent to such incidents in held Kashmir, he urged the human rights watchdogs to “at least distinguish between an issue and the ruthless killing spree.”
“I am not talking about the [Kashmir] issue; I am talking about humanity. Even if you have some difficulty raising your voice about the Kashmir issue, there shouldn’t be any hesitance raising your voice against the brutality towards humans,” Mr Qureshi said, while addressing the international community.
He also said they wanted to host an international conference on Kashmir in London on Feb 5. He urged all political parties of the country and the Kashmiri community living in London to participate in the conference in a large number to highlight the Kashmir cause.
In reply to a question, Mr Qureshi, who is also the vice-chairman of the ruling Pakistan Tehreek-i-Insaf, said all the political parties of the country had unanimity of views on the Kashmir issue and, therefore, they should not wait for any formal invitation. However, he said, he would contact Senator Mushahid Hussain Sayed of the Pakistan Muslim League-Nawaz and Senator Sherry Rehman of the Pakistan Peoples Party and invite them to the Foreign Office to give their suggestions. He said if the parties wanted to organise the conference from the platform of the parliament, then the Foreign Office was ready to provide all assistance in this regard.
The foreign minister said all political parties should show solidarity for the just and human cause and gather under the national and Kashmiri flags, instead of their party flags.