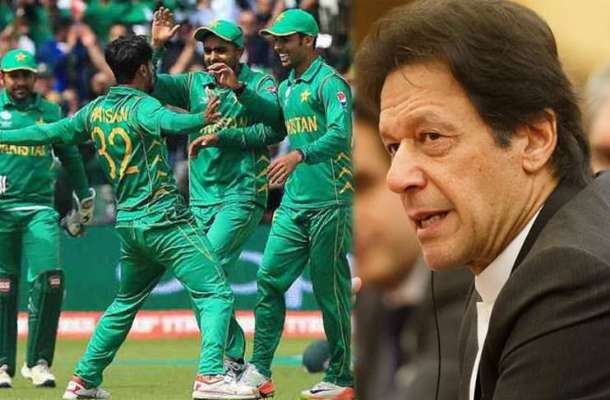 ISLAMABAD: Ahead of Pakistan Cricket Team’s clash with arch-rivals India, 1992 world cup winning captain and current Prime Minister of the country, Imran Khan has advised the home side to compete without thinking of losing the game.
Pakistan team are all set to lock horns with India in a match-up of cricket world cup 2019 today (Sunday).
In his message to Sarfraz XI on Twitter, Premier stressed on the significance of mental strength and confided his trust in Skipper Sarfraz Ahmed.
In a series of Tweets, Prime Minister Imran Khan gave few tips to Sarfraz and team management, stressing to opt for specialists while selecting the team for the match against India.
He added that arch-rivals may be termed favourites but the team must fight till the last ball, not fearing the negative consequences.
He continued by telling the Pakistani players to remove all fears from their minds and to not be in a negative state of mind.
“All fears of losing should be banished from the mind as the mind can only process one thought at a time. Fear of losing leads to a negative & defensive strategy & crucially mistakes by opponents are not pounced upon,” he said, continuing to give three crucial suggestions to the captain.
“1. In order to have a winning offensive strategy Sarfaraz must go in with specialist batsmen and bowlers because “Raillu Kattas” rarely perform under pressure – especially the intense kind that will be generated today.
“2. Unless pitch is damp, Sarfaraz must win the toss & bat
“3. Finally, even though India may be the favourites, banish all fear of losing. Just give your best and fight till the last ball. Then accept whatever the result like true sportsmen,” he said.
He ended his messaged by wishing luck to the team.
“The nation’s prayers are with all of you. Good Luck.”