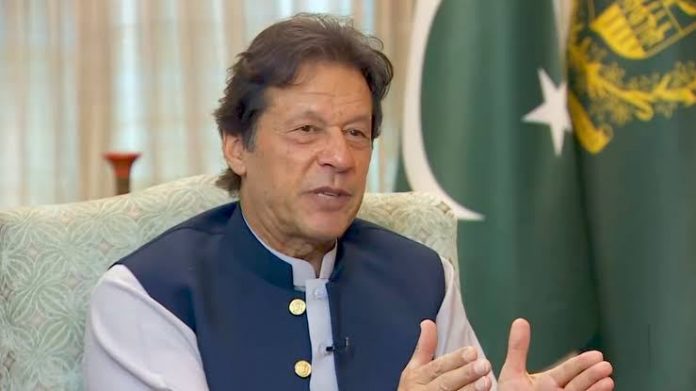 ISLAMABAD: Prime Minister Imran Khan on Thursday said that the government has decided to ease the lockdown in the country considering the impacts it has on the economy.
He was speaking after the meeting of National Coordination Committee (NCC), which is the apex coronavirus decision-making body comprising top civil and military leaders including the provincial chief executives.
“We have decided to open the country in a phased manner from Saturday and it is now the responsibility of the masses to follow the rules otherwise we would be forced to reverse the decision.”
PM Imran said, “I was in favour of allowing public transport but the provinces did not agree to it. So, it has been decided that the provinces will make their own standard operating procedures (SOPs) and share with the Centre.”
The prime minister said that the National Command and Operations Centre (NCOC) headed by Planning Minister Asad Umar meets daily and analyse the current situation and take input from the provinces as well.
They consult with doctors and experts and then take the decision, said the premier.
“We are still not sure when will the coronavirus peak come, in one month or two months but we have to open our industries as the daily wage earners and labourers are suffering due to the lockdown and closure of businesses.”
Pakistan’s situation is better than as compared to other European and rich nations, he said.
He said that our tax collection has already gone down by 35%.
The PM said that the government has announced the relief package of Rs 1.2 trillion, which is the biggest in Pakistan’s history.
We have to strike a balance in curbing the virus and fighting the hunger in the country, he added.
PM’s focal person on coronavirus, Dr Faisal Sultan said we consult colleagues from around the world and seek their input to make policies accordingly.
“We keep a close eye on global trends. Our trajectory of the cases is slow but we don’t want to ease restriction in such a way that we lose control of the disease.”
Earlier on Wednesday, the NCC had proposed easing in lockdown restrictions after May 9.
Earlier in the day, Punjab, Balochistan, and Sindh, in an inter-provincial education ministers conference, had opposed reopening educational institutions after June 1.
In the meeting, chaired by Federal Education Minister Shafqat Mahmood, the provinces stressed on keeping educational institutions closed. The meeting remained inconclusive and the matter was left for the NCC to decide.
On Tuesday, the Federal Cabinet had approved a proposal about easing country-wide restrictions after May 9.
PM Imran had backed the proposal of easing restrictions in the country, keeping in view the hardships being faced by people due to the lockdown.
However, he warned of an abrupt spike in infections if the standard operating procedures (SOPs) were not implemented strictly after easing of the lockdown.
The NCOC has firmed up multiple recommendations to ease the lockdown restrictions imposed to curb the spread of coronavirus.
The measures include the opening of inter-provincial transportation in line with laid down Standard Operating Procedures (SOPs), and operationalisation of selective of Outdoor Patients Departments (OPDs) in the federal capital.
The suggestions included measures to strike a balance between efforts to curb coronavirus and revive economic activities. These will remain in effect till May 31, if approved in tomorrow’s meeting.
The recommendations also include the opening of phase II of the construction sector and the reopening of retail outlets.
The participants also proposed that shops should remain open from 9 am to 5 pm, and then again from 8 pm to 10 pm.
No changes were made in the SOPs for religious festivities in the second half of the holy month of Ramadan; the measures will remain the same as previously agreed between the government and Ulema.