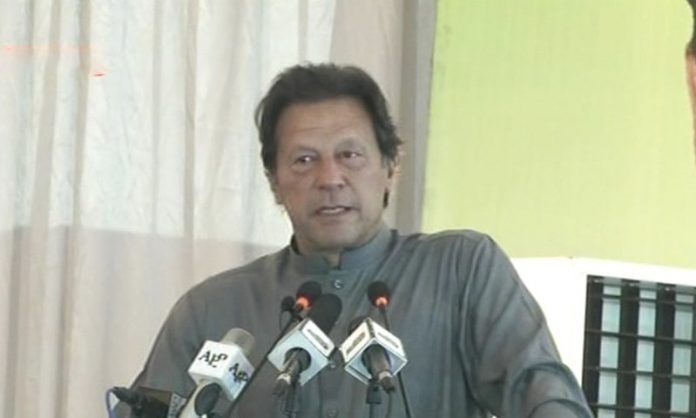 NOWSHERA: Prime Minister Imran Khan inaugurated the Azakhel dry port in Nowshera district on Friday. The dry port has been completed at a cost of Rs510 million and is expected to boost trade and economic activities in Khyber Pakhtunkhwa.
Addressing the ceremony, Prime Minister Imran congratulated Minister for Railways Sheikh Rashid Ahmed on the completion of the project.
“Now let me tell you why no government has ever invested money on railways … it is because railways is the medium of travel for the poor, not the rich. Money was always poured into things and projects that will benefit the rich elite of the country,” the prime minister said.
“Railways has been in loss for years, it rakes up losses worth billions every year and the hard-earned tax money that people pay is used to pay for those losses. Our government is trying to turn railways into a profitable organisation so that the common man can benefit from it.
“We will sell and re-purpose all the land that railways has in order to pay for the previous losses that the previous governments had raked up.
“We are trying to make Pakistan a welfare state. For that, we are trying to come up with policies that are people friendly. In railways, we have started giving concessions on tickets to people above the age of 60.
“We are also developing stalls on railway platforms for women so that they are able to make money and provide for their families.” He also give the details of all the projects that the government has started under the Ehsas programme.
Earlier, Minister for Railways Rashid took the floor and said: “The Rs510 million Azakhel dry port project will promote business and trade in Khyber Pakhtunkhwa.”
“I would like to suggest that we add the Peshawar-Jalalabad rail route to the ML-1 track. I assure you prime minister sahib if that happens all smuggling will end in the country.”
Ahmad said the Peshawar-Jalalabad railway project would connect Pakistan with Afghanistan and Central Asian Republics and turn the province into a hub of trade, business and investment.
“When it had started, the China-Pakistan Economic Corridor (CPEC) was solely based on a single railway track; other things were simple minor projects. Today, railways have been left behind because of negligence and CPEC has moved forward,” Rashid said.
“I would also like to announce that railways will provide raises to its employees from the revenue it is generating,” Rashid said while adding that 100,000 jobs will open up the day the ML-1 railway track opens. The minister said he was hopeful that the Pakistan Railways would become a profitable organisation within four years. He said the federal government had planned mega projects to strengthen and increase railway connectivity in Khyber Pakhtunkhwa.
He said the proposed railway track would pass through Loi Shalman area of Khyber tribal district, mountainous terrains and beautiful landscapes of KP and thus, promoting tourism.
He said the government had decided to open the Nowshera-Dargai railways section, which would help promote tourism in Malakand division, including Swat, Dir, Chitral and Buner districts.
Speaking before Prime Minister Imran and the minister for railways, Minister for Defence Pervez Khattak — who hails from Nowshera — pointed out some issues that the people of Azakhel have which the railway ministry and the prime minister’s office could resolve.
“I am taking this opportunity to tell the railways minister and the prime minister the problems of the people of Nowshera and hope that Sheikh Rashid and the prime minister will announce some packages to solve these problems,” Khattak said.