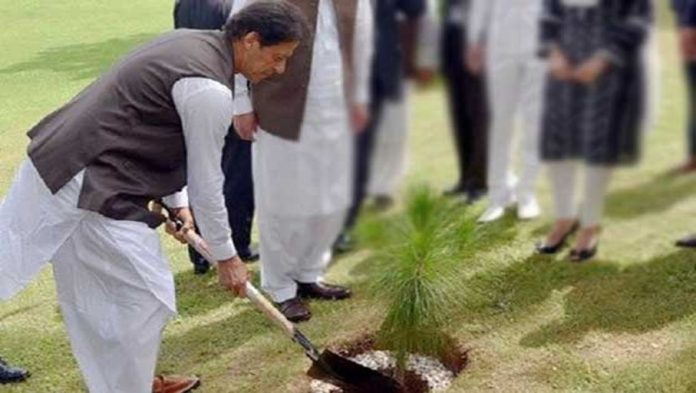 KAHUTA: Prime Minister Imran Khan has inaugurated the monsoon tree plantation campaign in Kahuta and announced that the federal government set a target to plant 10 billion saplings across the country.
PM Imran Khan inaugurated the monsoon tree plantation drive by planting a sapling in a ceremony held in Kahuta. The premier was accompanied by his Adviser on Climate Change Malik Amin Aslam and State Minister for Climate Change Zartaj Gul.
While addressing the ceremony, PM Imran Khan paid tribute to the passion of the youth for their participation in the tree plantation campaign across the country. He said that youth and students are the future of Pakistan. The premier also praised the youth over implementing the precautionary measures against coronavirus by wearing face masks.
PM Khan said that the pandemic has brought disasters to the world, however, Pakistan suffered less from the virus as compared to the other countries due to blessing of Allah Almighty. He reiterated that the mortality rate due to coronavirus was consistently dropping in Pakistan.
He said that Pakistan could be prevented from the negative outcomes of environment changes by securing the forestal zones, but instead the forests were reduced. Only 30 nationals parks were established in the country since 1947. The present government has so far established nine national parks, planted 300 million trees within two years, he added.
The federal government has set a target to plant 10 billion trees across the country, announced the premier.
He asked the young generation to plant and secure the trees as the youth are more aware of the environmental changes. PM Khan continued that school students will also be given information regarding the clean and green environment.
The premier said that the provincial chief secretaries have been issued directives to provide the master plan of the cities in order to curb unplanned urbanisation and focus of the expansion of agriculture zones.