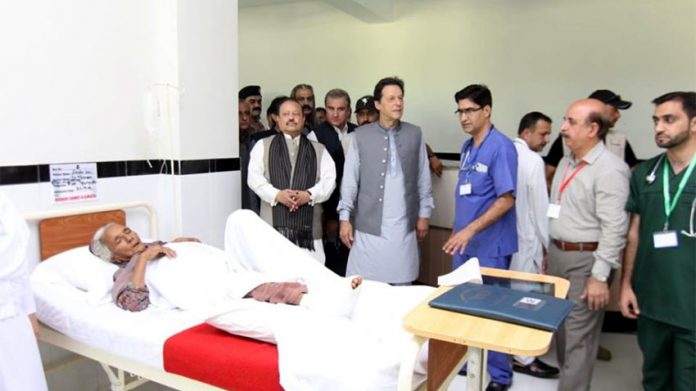 MIRPUR: Prime Minister Imran Khan on Monday has arrived in Azad Kashmir and met the earthquake victims to express solidarity with them.
The premier paid a visit to District Hospital and inquired about the health and medical facilities from the quake affectees. He also extended his condolences over the destruction and loss of precious lives.
Meanwhile, the concerned authorities have also briefed the PM over ongoing rescue operation in the areas.
Azad Jammu and Kashmir Prime Minister Raja Farooq Haider Foreign Minister Shah Mahmood Qureshi, Minister for Kashmir Affairs and Gilgit-Baltistan Ali Amin Gandapur and National Disaster Management Authority Chairman Lt Gen Mohammad Afzal were present on the occasion.
Earlier, Commissioner Mirpur told media that 40 lost their lives while 680 others were injured in the quake.
He said 172 people are critically injured whereas 1654 buildings received damages. 140 schools, 200 vehicles and 500 animals suffered due to earthquake, he added.
On September 24, a 5.8 magnitude earthquake rattled Azad Kashmir and other parts of Pakistan.
Several houses, shops and buildings collapsed in different parts of Azad Kashmir, whereas, images obtained from the affected areas showed massive cracks on roads.
Meteorological Department said that according to its assessment, the epicentre of the 5.8-magnitude quake was located near the mountainous city of Jehlum in the Punjab province.
“The quake was 10 kilometres deep and was felt in most of Punjab province, some parts of Khyber Pakhtunkhwa. The worst hit was Mirpur, Azad Kashmir,” Chief meteorologist Muhammad Riaz told.