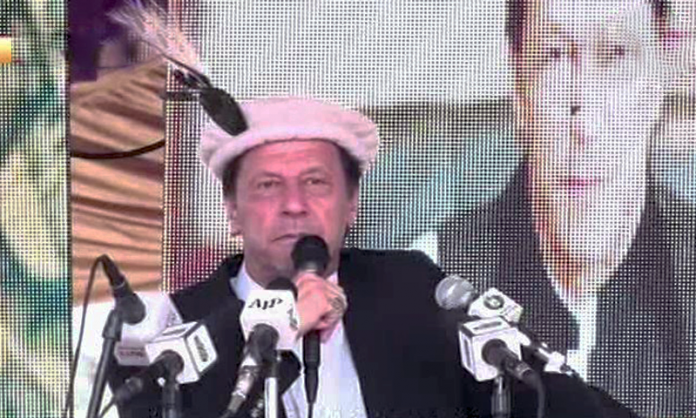 GILGIT: Prime Minister Imran Khan, while addressing a public rally in Gilgit-Baltistan, told the ‘Azadi March’ protesters congregated in Islamabad that when they run out of food, more will be sent to them, but their leaders should not expect any amnesty from him.
“Gone are the days when one used to use Islam to gain power. This is a new Pakistan. Sit however long you want. When your food runs out, we will send more. But we will not give you an NRO,” declared the prime minister.
His comments came shortly before PML-N President Shehbaz Sharif joined the Azadi March in Islamabad.
Visiting the region on the occasion of its independence day, the prime minister regretted that while the day marked a glorious event, a movement was on that day seeking disruption in Islamabad.
“We are celebrating your independence while an Azadi March [is ongoing in Islamabad]. Who are they wishing to gain freedom from?”
“I want the media to go there and ask people who they wish to free themselves from,” said the prime minister, stating that all his opponents appear disjointed in their thoughts and aims.
“If you ask PPP, they will talk about inflation; if you talk to PML-N they won’t know why they are there. JUI-F will decry a ‘Jewish conspiracy’ [to undermine Pakistan].”
“When Maulana Fazlur Rehman is there [in Islamabad] we have no need of foreign conspiracies,” said the premier, adding: “The way the Indian media is celebrating [this march], it makes it seem he [Rehman] himself is (an Indian) national.”
The prime minister regretted the use of Islam for shoring up votes. “The youth will be misled. They will think he [the Maulana] is the caretaker of Islam. Instead of coming to Islam, people will leave religion after looking at him.”
“People are on to you now, Fazl. This is the age of social media. People know there is no substance in your statements. People remember that when PTI gave a dharna [in 2014], what the PPP, PML-N had said at that time,” he said.
“Even Asfandyar [Wali] is there, who used to speak against JUI-F all the time,” remarked the prime minister.
The prime minister also asked what Bilawal Bhutto, the PPP leader who usually takes progressive political positions, is doing joining hands with a right-wing Islamist party.
“Bilawal, who calls himself a liberal, has also joined the jalsa. [It seems] the only thing ‘liberal’ about Bilawal is that he is liberally corrupt,” he said.
He asked all parties who had gathered in Islamabad to tell people what their real motive is. “Tell people why you have really gathered,” he dared the opposition.
He said the real reason was that their corruption cases are “laid bare for everyone to see. They are all afraid they will be next.”
The prime minister vowed to turn a new page in the history of the country. “We will not be a country which allows such thieves to live in palaces. You will [all] go to jail. And then people will be afraid to do [what you have done].”