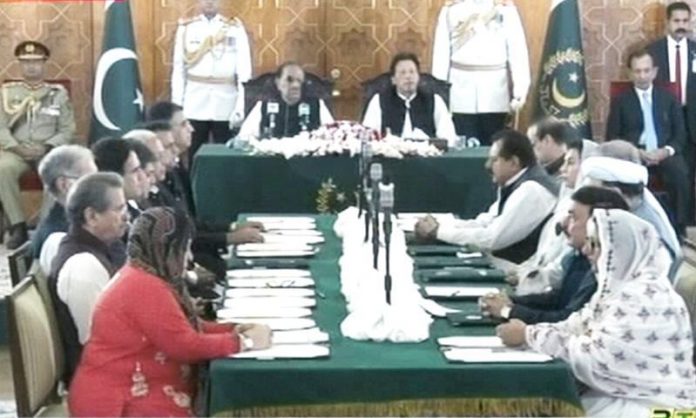 ISLAMABAD: The 21-member federal cabinet of Prime Minister Imran Khan was sworn in at President House on Monday.
President Mamnoon Hussain administered oath to the new ministers of their offices at a simple but impressive ceremony at Aiwan-e-Sadr in Islamabad this morning. Prime Minister Imran Khan was also present on the occasion. The ceremony was attended, among others, by Speaker National Assembly Asad Qaiser, Advisors, leaders of Pakistan Tehreek-e-Insaf, and other prominent political and social personalities.
The federal cabinet comprises 21 members of which 116 are ministers while five others will discharge their duties as advisers to the premier.
The premier will chair the first meeting of the cabinet today after a notification with regard to its composition issued.
PTI vice president Shah Mahmood Qureshi, who had served as foreign minister in the PPP government from 2008 to 2011, has been entrusted with the same portfolio once again.
Former chief minister of Khyber Pakhtunkhwa province Pervaiz Khattak has been given the charge of defence in the Imran Khan-led government at the Centre. Whereas, Asad Umer has been given the most challenging portfolio of finance.
Awami Muslim League (AML) chief Sheikh Rashid has been given the portfolio of the railway minister. He previously held the same portfolio under the Musharraf regime.
The Ministry of Human Rights went to Shireen Mazari while Fawad Chaudhry has been entrusted with the information ministry.
Other members of the cabinet included Farogh Naseem (Law and Justice), Tariq Bashir Cheema (Safron), Ghulam Sarwar Khan (Petroleum), Zubaida Jalal (Defence Production), Aamir Mehmood Kiyani (Health), Fehmida Mirza (Inter Provincial Coordination), Khalid Maqbool Siddiqui (IT), Shafqat Mahmood (Education) and Noor ul Haq Qadri (Religious Affairs).
The cabinet also includes five advisors. They are: Muhammad Shehzad Arbab, Advisor on Establishment; Abdul Razak Dawood, Commerce, Textile and Industry; Dr. Ishrat Hussain, Institutional Reforms and Austerity; Amin Aslam, Climate Change; and Babar Awan, Advisor on Parliamentary Affairs.