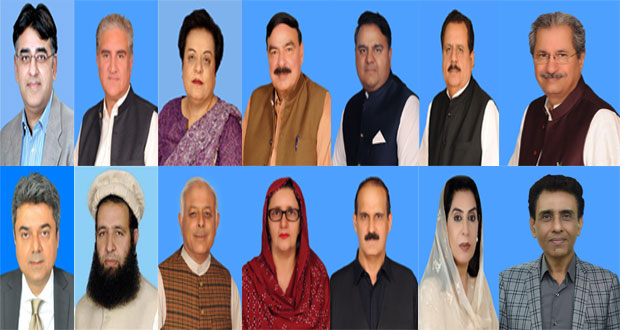 ISLAMABAD: Prime Minister Imran Khan’s federal cabinet is set to take oath today, starting their new assignments to implement the plans announced by the Pakistan Tehreek-e-Insaf (PTI) during the election campaign.
The 21-member cabinet includes 16 ministers and five advisers. President Mamnoon Hussain will administer the oath to the new cabinet at 10am at the Presidency.
PTI’s Spokesperson Fawad Hussain Chaudhry said that a key meeting of the cabinet will be held after the oath taking. He added that a framework to implement the Khan’s promises to the national will be center of discuss in the meeting.
The cabinet will approve a plan to bring the money, which was sent abroad through illegal channels, back to Pakistan, Chaudhry announced in a tweet.
The PTI’s Pervez Khattak will get the portfolio of defence and Asad Umar will become the finance minister. Shah Mehmood Qureshi will be the foreign affairs minister and Shireen Mazari will look after the human rights portfolio. Ghulam Sarwar Khan will get the petroleum portfolio. Fawad Chaudhry will be the information minister. Shafqat Mehmood will take care of education, Aamir Kiyani will be the health minister and Noorul Haq Qadri will assume charge of the religious affairs ministry.
Six ministers from parties that have allied with the PTI will also be sworn in. Sheikh Rasheed, the chief of the Awami Muslim League, will become the railways minister. Khalid Maqbool Siddiqui of the MQM will be handed the information technology portfolio. The MQM’s Farogh Naseem will get the law ministry. The GDA’s Fehmida Mirza will become the provincial coordination minister while Tariq Bashir Cheema will take care of the state and frontier regions portfolio. Zubeida Jalal will be the defence production minister.
The five advisers are Mohammad Shehzad Arbab for establishment, Abdul Razak Dawood for commerce, textile, industry, production and investment, Dr Ishrat Hussain for institutional reforms and austerity, Amin Aslam for climate change and Babar Awan for parliamentary affairs.