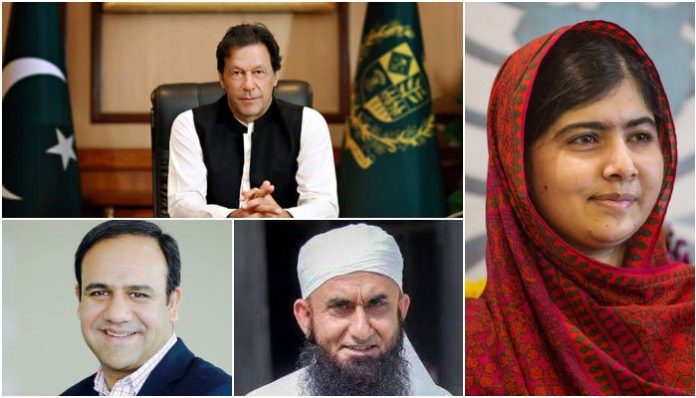 ISLAMABAD: Prime Minister Imran Khan, Nobel Laureate Malala Yousafzai, prominent religious scholar Maulana Tariq Jamil and Dr Umar Saif have been named among the World’s 500 Most Influential Muslims.
The annual publication is compiled by the Royal Islamic Strategic Studies Centre in Jordan, highlights people who are influential as Muslims.
This year’s list features some of the most prominent Muslims including Liverpool footballer Mohammad Salah, Dr Qadeer Khan, Dr, Atta Rehman, and Dr Irfan Siddiqui.
Among the top 50, ranked at 29 is PM Imran, whose crackdown on corruption and bringing accountability to the forefront has fast made him a global name. He has already implemented cutbacks in extravagant government expenditure and is using his personal credibility to fundraise for a dam,” the publication wrote.
A sporting legend, PM Imran played professional cricket for 22 years and is recognised as one of the game’s finest all-rounders. His ability to lead and unite an often disparate team, culminated in Pakistan winning the 1992 World Cup. It is this ability and success that many hope can be replicated in the political field.
His other contributions include Shaukat Khanum Memorial Cancer Hospital and Research Centre and NUML University, which provides scholarship assistance to over 90 per cent of its students.
The youngest Nobel Prize laureate, Malala also gets an honourable mention in the publication.
In 2013, Yousafzai addressed the UN, received the prestigious Sakharov Prize and was nominated for the Nobel Peace Prize which she co-received in 2014 at the age of 17.
She has also been listed as one of the 25 Most Influential Teens of 2014 by Times Magazine and has been granted audiences with royalty and world leaders.
Also featured in the publication is scholar Maulana Tariq Jameel, one of the most popular preachers in Pakistan.
In addition to running a religious seminary in Faisalabad, Pakistan, Maulana Tariq has delivered thousands of lectures around the world. He has been very effective in influencing all types of the community ranging from businessmen and landlords to ministers, actors and sports celebrities.
Award-winning scientist, entrepreneur, innovator and tech tycocon Dr Umar Saif is also part of the list.
A founding vice-chancellor of the Information Technology University in Punjab and one of the main forces behind the IT eco-system in Pakistan, Saif was named by MIT Technology Review’s World’s Top Young Innovators for the year 2011.
He was also named Young Global Leader by the World Economic Forum in 2010 and is the recipient of Sitara-e-Imtiaz.
Others Pakistanis on the list include Maulana Fazlur Rehman, former prime minister Nawaz Sharif, Dr Farhat Hashmi, Dr Tahir ul Qadri, Siraj-ul-Haq, Javed Ghamdi, Bilquis Edhi, Muniba Mazari, Professor Atta-ur-Rehman, Dr Abdul Qadeer Khan, Irfan Siddique, Sharmeen Obaid-Chinoy and Abida Parveen.
Turkish President Recep Tayyip Erdogan stands at the top of the most influential Muslims list, followed by Saudi King Salman bin Abdul-Aziz Al-Saud, King of Jordan Abdullah II ibn Al-Hussein stands at third, while Supreme Leader of Iran Ali Khamenei is at fourth. King of Morocco His Majesty Amir al-Mu’minin is at fifth.
Others in the list include Saudi Crown Prince Mohammad bin Salman, Russian professional mixed martial artist Khabib Nurmagomedov, British runner Mo Farah, MP Sajid Javed and London Mayor Sadiq Khan.