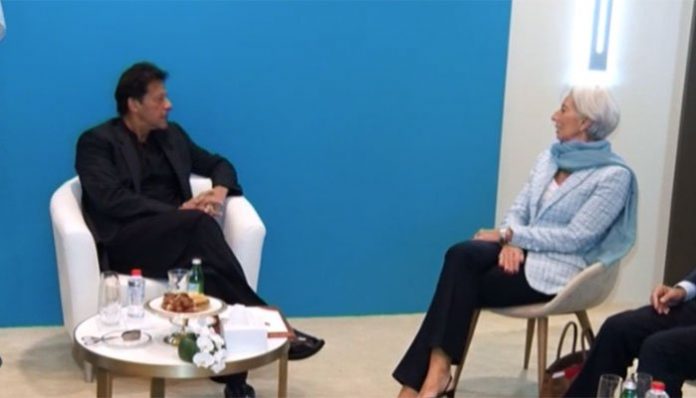 DUBAI: Prime Minister Imran Khan on Sunday met with Christine Lagarde, the managing director of the International Monetary Fund (IMF), on the sidelines of the World Government Summit in Dubai.
Pakistan is seeking its 13th bailout since the late 1980s to deal with a current account deficit that threatens to trigger a balance of payments crisis, but talks have been delayed by difficulties in reconciling IMF reform demands with Islamabad’s fears the push is too drastic and could hurt economic growth.
The premier is in Dubai on a day-long visit, on the invitation of Sheikh Mohammad Bin Rashid Al-Maktoum to participate in the seventh edition of the World Government Summit. He is accompanied by Foreign Minister Shah Mehmood Qureshi, Finance Minister Asad Umar, Minister for Maritime Affairs Syed Ali Haider Zaidi and Adviser to the PM on Commerce Abdul Razak Dawood.
This annual gathering of heads of states/government, policymakers, business leaders and experts will provide an occasion to discuss current and future opportunities to improve governance through reform, innovation and technology.
Speaking to foreign news agency, Information Minister Fawad Chaudhry said, the talks between PM Imran and Lagarde on the sidelines of the World Government Summit gave Pakistan a chance to give their version.
He added, Pakistan wants any agreed bailout package, which would be the country’s second IMF bailout since 2013, to be the nation’s last such economic rescue by the IMF.
Officials had expected talks to conclude in November but they have been delayed as Islamabad harbours concerns that the programme could derail the economy and Khan’s plans for his term in office.
Pakistan has in the meantime sought financial assistance from Middle Eastern allies such as Saudi Arabia and the United Arab Emirates, who have loaned it in excess of $10 billion to ease the pressure on its dwindling foreign currency reserves.
“The problem is not the (IMF) deal, the problem is the condition attached to the deal,” Chaudhry said.
“We don’t want conditions that hurt Pakistan’s growth prospects. We want a fair deal that can actually help Pakistan in the short term, without affecting our long-term economic goals.”
The IMF talks come amid a worsening macroeconomic outlook, with growth expectations slashed for the current fiscal year to about 4 per cent from 6 per cent previously forecast.
On Saturday, Pakistan also revised its growth figures for the last financial year to 5.2 per cent from a previously reported 5.8 per cent, after a sharp cut in the figure for large-scale manufacturing, the statistics office said.
When the original estimate was reported in April by the government of Prime Minister Shahid Khaqan Abbasi it was hailed as the strongest growth in 13 years.
Before the revisions to last year’s GDP figures, Pakistan’s deficit to GDP ratio, estimated at 5.8 per cent in 2017-18, was expected to hit 6.9 per cent this year, according to IMF data.
During his visit to Dubai, PM Imran will underscore Pakistan’s strong interest in the knowledge economy, artificial intelligence, green development and the importance of innovation for growth.
In his keynote address at the summit, the premier will highlight his vision for a strong and prosperous Pakistan. He will encourage investment in different sectors of Pakistan economy.
He will also meet the UAE leadership during his visit.