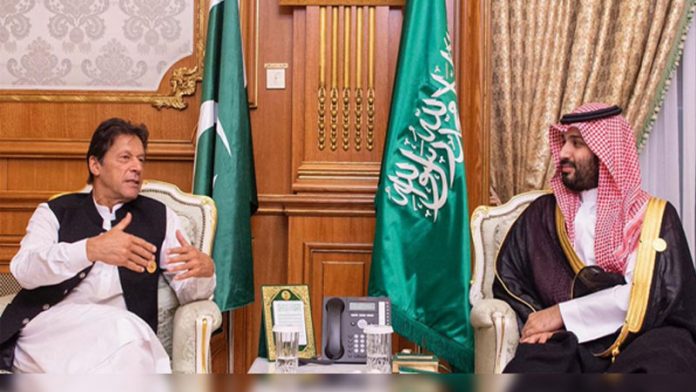 RIYADH: Prime Minister Imran Khan met on Thursday with Saudi Crown Prince Mohammad bin Salman and informed him about the current situation in India-administered Kashmir.
The prime minister arrived in Jeddah earlier in the day on a two-day visit to the kingdom. He was received by the Makkah governor upon arrival at the royal terminal.
Foreign Minister Shah Mehmood Qureshi, Finance Adviser Hafeez Sheikh, Special Assistant for Overseas Pakistanis Zulfiqar Bukhari and other officials have been accompanying the PM on the visit.
During his meeting with Crown Prince Mohammad, Khan condemned the attacks by Yemen’s Huthi rebels on Saudi oil facilities.
The Pakistan premier informed the Saudi crown prince of the current situation in occupied Kashmir, the ongoing lockdown and communication blackout and a humanitarian crisis originating from these restrictions.
The two figures also discussed bilateral relations and affairs of mutual interest.
During the visit, according to the Foreign Office, Pakistan and Saudi Arabia are expected to discuss ways to strengthen the economic partnership between the two countries.
Earlier this year, Mohammad bin Salman paid his first visit to Pakistan since becoming the crown prince. More recently, the country’s foreign minister visited Pakistan along with his Emirati counterpart to discuss the Kashmir situation.