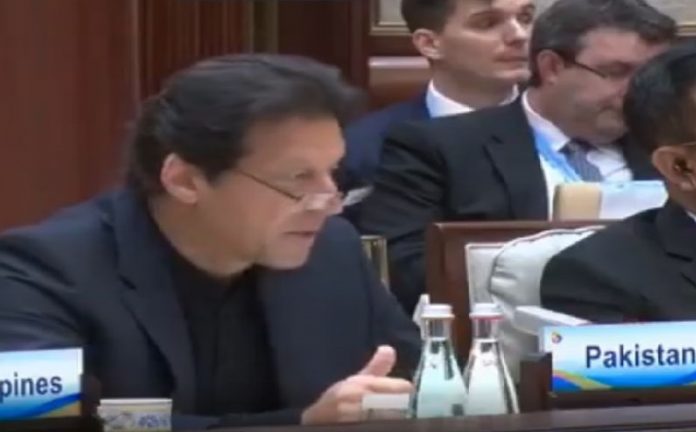 BEIJING: Prime Minister (PM) Imran Khan on Saturday emphasised on the significance of the China-Pakistan Economic Corridor (CPEC) as “a source of transformation for Pakistan rather than a mere transaction”, while addressing the leaders’ roundtable meeting at a session of the second Belt and Road Initiative (BRI) Forum for International Cooperation.
Earlier, Chinese President Xi Jinping warmly received Pakistani PM Imran Khan when he arrived at the roundtable meeting organised at International Convention Center, Yanqi Lake in Beijing.
Meanwhile, President Jinping chaired the leaders’ roundtable meeting, in which heads of state and government from 37 countries and other representatives from around the world were present.
PM Khan, while addressing the roundtable conference, asserted that the economic corridor would generate a positive change for Pakistan, and simultaneously the Gwadar port would substantially reduce costs of trade for Chinese companies.
He maintained that people-to-people contact would enhance by the initiative, besides development and prosperity for the entire region.
He also congratulated President Jinping and the Chinese people on the 70th anniversary of the founding of the People’s Republic of China.
“We should also consider digital connectivity, mobility of labour and transfer of skills, cultural links and knowledge and innovation connectivity to further expand the scope of the BRI,” PM Imran said.
“Pakistan is at the cross-roads of important regions. Throughout our history, we have connected ideas, cultures and commerce,” PM Imran continued.
“CPEC is not a transaction rather it is a transformation of our society,” the premier asserted.
Furthermore, he outlined that under CPEC, “Pakistan is privileged to have been an early partner of China. we are building highways, modernising rail network, setting up power plants, establishing a port and special economic zones.”
PM Imran further said, “President Xi Jinping has given the BRI vision to break barriers, connect people, integrate economies and share prosperity.”
The Chinese president urged world leaders to expedite work for basic infrastructure and industrial development to cope with challenges of the economy in the world today.
Mr Jinping urged the countries to open their borders for boosting trade and to upgrade the living standards of people.
Citing the BRI as an important forum for the economic development of the entire region, the Chinese president said that the BRI has achieved great progress since the first BRI Forum that was organised in May 2017.
“CPEC, one of BRI’s major components and one of its earliest manifestations, has made substantial progress. Pakistan’s energy supplies have increased massively and our critical infrastructure gaps are being plugged,” he said.
“China looks forward to working with all parties to improve the concept of cooperation, and focus on building the Belt and Road with high quality on the basis of extensive consultation and the rule of law, joint efforts, shared benefits and equal opportunities for all,” Xi said.
Xi added that the BRI focuses on infrastructure interconnection, accelerating intelligent manufacturing and cooperating in frontier areas of the digital economy.
He also urged for joint efforts to mitigate the effects of climate change.
A day earlier, President Jinping during the opening summit of the second BRI Forum had said that the BRI “must be green and sustainable,” adding that the massive infrastructure and trade plan would deliver “high-quality” growth for all.
Xi in his keynote speech on Friday said that environmental protection must underpin the initiative “to protect the common home we live in”.
“Operate in the sun and fight corruption together with zero tolerance,” Xi said.
“Building high-quality, sustainable, risk-resistant, reasonably priced, and inclusive infrastructure will help countries to fully utilise their resource endowments,” he said.
The BRF is a top-level platform for international cooperation under the framework of the BRI, which was initially proposed by the Chinese president in 2013.