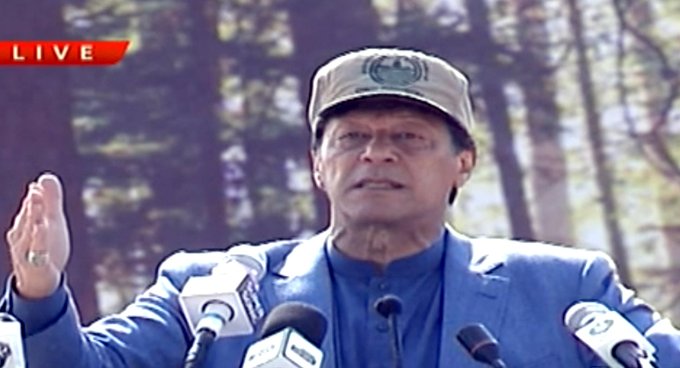 MIANWALI: Prime Minister Imran Khan has reiterated the government’s resolve to make Pakistan a welfare Islamic state in lines with the vision of founder of the nation, Quaid-e-Azam Muhammad Ali Jinnah.
Addressing the inaugural ceremony of Spring Tree Plantation Campaign in Mianwali on Sunday, he said the PTI-led government is working on the agenda of making Pakistan a prosperous Islamic welfare nation on the pattern of state of Madina.
Imran Khan expressed the government’s resolve to provide job opportunities to youth, alleviate poverty, and control inflation through prudent economic policies.
The Prime Minister said the government will provide six million health cards to people across Punjab out of which 5 million have already been issued.
He said the government will provide interest-free loans to eighty thousands people per month, while fifty thousand scholarships will be provided to under graduate students every year.
Shedding light on the significance of the plantation, the prime minister said the government is planning to introduce a subject of Tree Plantation in the curriculum across the country.
Imran Khan the youth has a major role to play in making the tree plantation drive a success.
He said the government’s Clean and Green Pakistan initiative in Khyber Pakhtunkhwa received global acclamation.
The Prime Minister directed the Punjab Administration to prepare a strategy to deal with timber mafia, which are involved in massive cutting down of trees.
Imran Khan also appreciated efforts of the Punjab government in providing basic facilities of education, health and clean drinking water to masses.
Earlier, the prime minister inaugurated the plantation drive by planting a sapling at Kundian area of Mianwali.